Why Drysdale's Streak Was So Amazing

TRIVIA WINNER: Congrats to  Samuel Barrett of Phenix City, AL, who identified the answer we were looking for; Frank Lary led the AL in complete games with 22.  The Prize: Starbucks Gift Card.

ANSWER to the Trivia question in the previous column: Frank Lary led the AL in Complete Games in 1961 with 22.

Every once in a while a record breaking streak in baseball belies the fact that if the streak wouldn't have been broken, the player may have gone onto even more amazing heights. Joe DiMaggio's 56 game hitting streak for instance. While he did not get a hit in Game 57, he got a hit in every game from 58 to 74. Picture Don Drysdale's 58 inning scoreless streak. If it wasn't for Howie Bedell it would have continued, but to show how amazing he was pitching at the time, you have to look at the next five games.

Drysdale bested Walter Johnson's record breaking streak with a 5-0 shut out of the Pirates on June 4th. Pitching in a four man rotation he would allow two runs in the next game against Philadelphia (the Bedell game). Four days later he went eight innings against the Mets in a 2-1 decision.

The streak almost ended at 44 innings when Giant's catcher Dick Dietz decided to NOT avoid a Drysdale inside pitch with the bases load. It would have forced in a run and the streak would have been over. Originally, as heard by Vin Scully's call in the above video, it was thought to hit his bat. However, Umpire Harry Wendlestedt ruled it did hit Dietz but since he made no effort to get out of the way, the pitch was ruled a ball, running the count to 3-2. Dietz flied out to end the inning and the streak was alive. 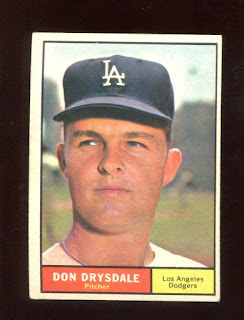 June twelfth, four days later, he went eight innings against the Mets in a 2-1 decision. On June 18th Drysdale went seven innings giving up just a solo (unearned) run due to an error against the Pirates. On June 22nd he again faced the Mets, went just under seven innings and allowed one earned run. The real heart of the following power innings came on June 26th against the hated Giants.

Drysdale would go nine innings, nearly shutting out San Francisco. He gave up just one (unearned) run which came on a throwing error by third baseman Ken Boyer. It wasn't until July 1st (or six games after the streak ended) against St. Louis that Big D actually gave up some earned runs in a bunch. And that wasn't until the seventh inning when he was relieved by Jim Brewer.

In all from the start of the streak on May 14th, thru the June 26th game, Drysdale pitched 95 innings, giving up 8 runs, but only 5 were earned, with a record of  9-1 for an ERA of 0.47. And before the streak started he'd pitched a 1-0 shutout earlier in the season. Now that's amazing.