TRIVIA WINNER: Congrats to Charles Van Horne who identified the answer we were looking for; Roy McMillan was the starting shortstop for the Braves until Denis Menke came along.  The Prize: Starbucks Gift Card.

ANSWER to the Trivia question in the previous column: When Denis Menke became the starting shortstop for the Braves he replaced Roy McMillan.

NOTE; THERE WAS NOT COLUMN LAST WEEK AS WE TOOK CHRISTMAS WEEK OFF.

In an unusual situation the two leagues expanded in consecutive years. The Senators opened their franchise playing in 1961. New York would have to wait until 1962 to see the Mets try to replace the NL Giants and Dodgers who had moved on four years earlier.

While the Mets would lose 120 games under Casey Stengel in the first season, the Senators would lose 100 under Mickey Vernon. New York was saddled with players who would never reach the plateau they so wanted in the bigs. Names such as Elio Chacon, Charlie Neal, Rod Kanehl and Choo-Choo Coleman would send as much fear into the opposing pitching staff as would the Senators Gene Green, Coot Veal, Willie Tasby and Billy Klaus. 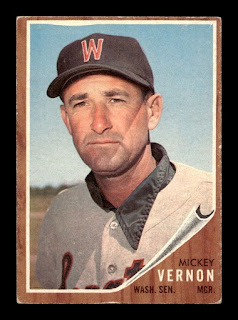 Through the clubs first four years the Mets would drop 452 games. The Senators during the first four years lost 407. Such ineptness may never be seen again. By the time the 1972 season rolled around the Senators would leave Washington for the friendly confines of Arlington, Texas, having never won more than 86 games. They closed out the decade in 1969 with the clubs only season where they won more than they lost, finishing with a .531 winning percentage.