FIRST; I want to offer an apology to my readers. For some reason, four of the episodes of my new Podcast got posted to this blog. Perhaps it's because I do them under the same files but it should not have happened. Sorry about that. That being said here is a link to the podcast which is about former Senators pitcher, Don Rudolph and his burlesque queen wife, Patti Waggin. It is a 12 episode podcast which we'd like you to listen to and enjoy. Go to the website and on the home page click on the "free podcast" box which takes you to the podcast. Click HERE.

TRIVIA WINNER: Congrats to  Jack Webster of Derry, NH, who identified the answer we were looking for; Dick Bosman.  The Prize: Starbucks Gift Card.

ANSWER to the Trivia question in the previous column: Dick Bosman received MVP votes for the 1969 Senators.

NOTE; THERE WAS NOT COLUMN LAST WEEK AS WE TOOK CHRISTMAS WEEK OFF.

How bad were the 1961 Philadelphia Phillies? Winning just 47 games, it was the low point of the 1960s for this once proud club. They were mostly young guys, with a few aging stars. Johnny Callison was only in his third full season. HOFer Robin Roberts at 34 would actually have much better seasons ahead.

Roberts finished 1-10 as mainly a starting pitcher. Having won 20 games multiple times in his past, he would go on to play five more seasons and win 52 more games. However, his low point in his career was 1961. He pitched 117 innings and had a horrible 5.85 ERA.

Only one player on the team batted as high as .277 and that was 24-year old Tony Gonzalez. He also smacked 12 homers which was third highest on the club but not by much. Pancho Herrera had 13 while Don Demeter led the club with 20. Demeter was not a full time starter. He also led the team in RBI with 68. Callison led Philadelphia with 20 doubles, 11 triples and batted .266. 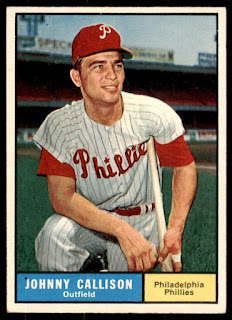 The oldest player on the club was Elmer Valo at 40, the youngest Paul Brown at 20 but he only appeared in five games. Most of the players ranged from 23-27 years old with a speckling over and under that age group.

The team did have some future stars aside from Callison. Gonzalez went on to a fine career as did Wes Covington and pitcher Chris Short. It was a year manager Gene Mauch would like to have back as would the 590,000 fans who went thru the turnstiles to watch their Phillies finish in 8th place in an eight team NL.