TRIVIA WINNER: Congrats to Scott Hitchcox or Portage, MI,  who correctly identified the super minor league player Johnny Werhas of the Dodgers who was the answer to our question. The Prize: Starbucks Gift Card.

ANSWER to the Trivia question in the previous column: Johnny Werhas was the super minor leaguer the Dodgers employed every once in a while.

There was never any doubt Dick Stuart could hit and hit the ball very far. His 228 homers over a 10 year career belie the fact for five of those years he was one of the most feared sluggers in baseball. He led the 1960 Championship Pittsburgh Pirates with 23 dingers but it was the first year he played after being traded by the Pirates which tells an amazing story. And the story is NOT only about his hitting. As you might imagine it's about his fielding but we'll get to that in just a bit.

After hitting 85 homers in three years in Pittsburgh (and playing in spacious Forbes Field) Stuart fell off to 16 in 1962 when he only played in 114 games. The Bucs were rebuilding and with Donn Clendenon in their future they sent Stuart and pitcher Jack Lamabe to Boston for reliever Don Schwall and catcher Jim Pagliaroni. Pags would become a standout and fan favorite in Pittsburgh. 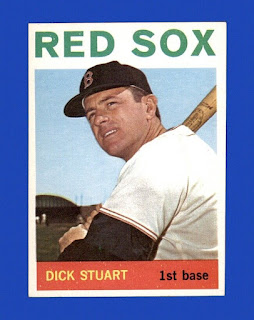 Boston salivated over the fact they had a big time right handed slugger to blast it over the Green Monster and Stuart took advantage of it. In his first year in Boston (1963), Stuart blasted 42 homers and led the AL in RBI with 118. He added 25 doubles while batting .261. He also led the league in Total Bases with 319. Then again he struck out 144 times and had a major league leading 24 times he grounded into a double play. Then there was his defense and that is where the story takes the twist.

Known as Dr. Strange Glove it was a fitting moniker for the first baseman as Stuart led his league in errors committed by a first baseman seven times for seven straight years! In 1963 however, he really proved his defensive prowess or lack of it. Here are the numbers for the AL first baseman that year;

Finished 1st in games played 155, Putouts 1207, Assists 134, Errors 29 (his career high) and third in Double Plays 100. For his career he finished 42nd all time in errors committed by a first baseman and he only played over 10 seasons, but just seven as a regular first sacker getting into at least 114 games. He had 169 booted or misplayed balls. An interesting figure shows in 1961 he was involved in 144 league leading double plays. Of course he was at the tail end of the play involving two guys named Groat and Mazeroski.

It was hard not to love this guy and later he had one good year with the Phillies while both the Dodgers and the Mets found ways to use him for pinch-hitting and as a back up first baseman. And while his home run hitting was paramount no one could ever accuse him of a gold glove season.