TRIVIA WINNER: Congrats to Jerry Parker of Queens, NY, who correctly identified the Cleveland Indians as the team Claude Osteen beat for his final win of his career. The Prize: Starbucks Gift Card.

ANSWER to the Trivia question in the previous column: Claude Osteen beat the Cleveland Indians for the final victory in his career.

When a big time major leaguer gets traded and a super minor league prospect is part of the deal in return, fans often wonder what happened when that minor league player goes "bust." There are any number of their stories in baseball. We will take a look at three. First, Dick Simpson.

When the Reds decided they needed pitching more than they needed slugger Frank Robinson who was still in his prime, they sent the outfielder packing to Baltimore for Milt Pappas. Everyone knows what happened to Robinson who won the Triple Crown in leading the Orioles to the World Series. Pappas never panned out like the Reds hoped. Then there was the outfielder the Reds got in return; Dick Simpson. 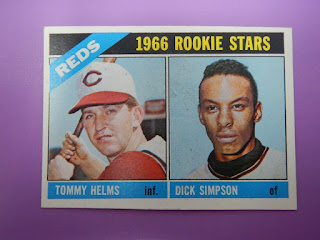 Maybe they were impressed with his stats a few years earlier. In 1961 Simpson slugged 42 homers, drove in 113 and batted .315 for San Jose's minor league club. In seven minor league seasons he would hit 108 homers and bat .286 for affiliates of many clubs. In his seven major league seasons he would bat just 518 times (the equivalent of just one full season) with 15 homers and a .207 BA.

Simpson made more of an impact because of who he was traded for. After Robinson, the Reds sent him to the Angels for Alex Johnson who had a lifetime average of .288 and a career best .329. He was also traded for Dooley Womack, Bobby Bolin, Norm Siebern and Ron Davis. 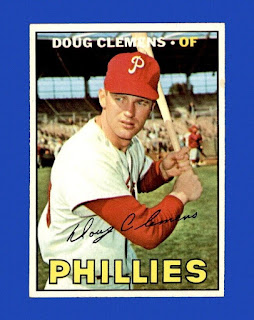 The minor leaguer the Cubs got in the Lou Brock for Ernie Broglio deal was Doug Clemens. In 1961 at Tulsa, Clemens hit a pretty impressive .342. He slumped a bit into the .270's the next couple of years but was promising. In five minor seasons he batted .298 with 48 dingers. His seven major league seasons amounted to just over 900 at bats and a lifetime .229 BA. His best season (.279) was the same season he was traded for Brock and came up right away. He never achieved that again.

One of the most interesting careers was that of Moose Stubing who can be likened to Crash Davis in the film "Bull Durham." Stubing was signed by Pittsburgh in 1956, was sent to the NY Giants in 1957, who traded him in 1965 to the Cardinals for George Williams who then sent him to the Angels. His entire major league career as a player consisted of one season where he pinch hit five times and struck out four times. Actually I remember listening to the Angel games where that happened wondering if this guy would ever hit a fair ball.

Especially, this was interesting because, like the Bull Durham catcher Davis, Stubing had a grand minor league career belting 192 home runs over 15 seasons with a .283 BA and 811 RBI. Stubing of course went on to manage the Angels for eight games in 1988. The Angeles lost all eight.  He did have a fairly successful minor league managing career. Over nine seasons he finished above .500 six times. In 1982 he was named PCL Manager of the Year and later became a college referee.