TRIVIA WINNER: Congrats to Steve Bailey of Rochester University, who correctly stated the batter Cesar Tovar struck out in the game where he played all nine positions, was Reggie Jackson. The Prize: Starbucks Gift Card.

Few people remember when the San Francisco Giants had too many good players at a key position, they traded off one of them who would become an outstanding major league player with the Cubs. Randy Hundley was signed originally by the Giants. However, they also had Tom Haller up front, Dick Dietz waiting in the wings and a very capable Bob Barton on the bench. Quite frankly, they needed pitching more than an up and coming catcher. A two fold mistake for San Francisco.

After a couple of cups of coffee in 1964-1965, Hundley was sent packing to Chicago along with Bill Hands for Lindy McDaniel and outfielder Don Landrum. McDaniel had one great season, Landrum was pretty much finished and Hands would win 92 games for the Cubs. He won 20 in one of those seasons. Hundley nearly was voted Rookie of the Year in what turned out to be a terrible trade for the Giants and a steal for Chicago. 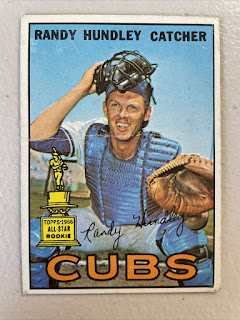 Hundley started immediately with 19 homers and a .236 average. Defensively he would have better seasons and in fact was one of the best defensive catchers in the NL in the era. His 16 Passed Balls probably kept him from ROY honors. He went on to become an all-star and won a  Gold Glove. He never approached double figures in PB's again.

He would play 14 seasons in the big leagues including 10 with the Cubs. Three times he hit the double figure mark in homers and while he never hit for average, his mainstay was handling Cubs pitchers. Many of them won 20 games with him behind the plate, including Hands and Fergie Jenkins.