Steve Carlton Gets His Start

Steve Carlton made his major league debut in a relief role April 12, 1965 and while he didn't pitch much that season he did get a couple of starts. He failed to get a win. On August 5, 1966 however, he proved "Lefty" had arrived.

The Cardinals were barely above .500 and the Mets were, well the Mets. Eleven games under .500 New York was playing out the string, but then again so was St. Louis. The Cards were a solid hitting team with some power and would show it in backing Carlton this day. Orlando Cepeda was the club's big gun along with Mike Shannon and Lou Brock. Curt Flood was his usual self and players such as Charlie Smith and Julian Javier were solid as well. They were two years removed from a World Series and one year away from another title. Carlton was just beginning. 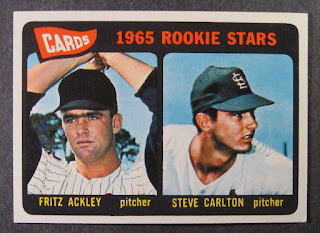 He started off shaky, giving up six hits and tossing a wild pitch in the first five innings. Tito Francona had homered earlier for St. Louis but a fly ball out tied the game in the fifth. It was the only run the Mets would get.

In later innings Javier and Tim McCarver would also go deep. The Mets were held in check as Carlton settled down allowing only one hit and three walks the rest of the way, pitching a complete game victory 7-1. Interestingly enough, the future strikeout king only whiffed one batter in his first MLB win. Al Luplow watched as a third strike crossed the plate in the fourth inning.

Carlton would finish the year  3-3, with a 3.12 ERA. He started nine games and completed two, including one shutout. He struck out 25 batters in 52 innings. A far cry from what he would later do with the Phillies in becoming one of the most dominant pitchers of the era on his way to the Hall of Fame. He was a five time 20-game winner with 329 victories.