The 1960 national Laague batting race was among the closest in history. It came down to the final game of the season between league MVP Dick Groat of the Pirates and Norm Larker of the Dodgers. Either one could have sat out game no. 154 and taken their chances but with the title on the line, both chose to play.

Going into the final game Groat was hitting .32513 to Larker's 3226. If Groat gets a hit against Milwaukee, Larker must get at least two hits against the Cubs. Pittsburgh is at home for a Sunday day game three hours ahead of the Dodgers in Los Angeles. Vin Scully and the Dodger broadcast team would know well in advance what Larker would need to do to beat out Groat. It was Forbes Field versus the L-A Memorial Coliseum, and Lew Burdette for the Braves while Dick Drott was on the mound for the Cubs.

Through four innings Groat was hitless in two at bats. He led off the fifth with a single. Now 1-for-3 that meant in all likelihood Larker would need at least two hits. Groat would fly out in his final at bat in the 6th. He was scheduled to hit in the 8th inning but manager Danny Murtaugh chose to pinch-hit with Bill Mazeroski with the Bucs leading 9-5.

Was it to bring in the defensive whiz at second base and move Dick Schofield to short, or was Murtaugh trying to preserve the batting title for his MVP candidate? There is no evidence of that we could find but it has been suggested. Groat would finish with .32460. Larker would need two hits to take the crown. 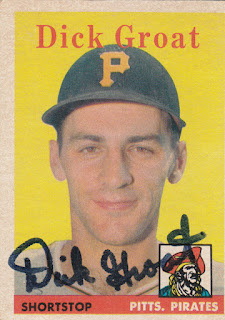 Larker had gone two-for-nine in his last three games. He usually hit in the middle of the order. However, in game no. 154 manager Walt Alston had him batting second. Perhaps to give him more chances to hit. He was foiled in his first at-bat. After a lead off single by Maury Wills, Drott walked Larker. No official at bat there.

Larker led off the third and grounded out to second base facing Dick Burwell.  Moe Drabowsky came on in the fifth and with one out Larker hit a ground ball back toward the mound which Drabowsky couldn't handle and it went for a single. Larker had the first hit and at 1-for-3, he was one shy of a batting title. 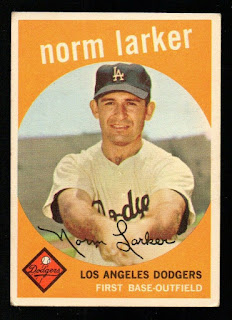 In the seventh, facing Don Cardwell, Larker hit a flyball. It would all come down to the ninth inning with the score tied 3-3. Bob Lillis led off the inning for the Dodgers and hit a groundball back to Cardwell who threw wildly to first for an error. Pinch-hitter Wally Moon walked and Johnny Roseboro laid down a bunt. It was perfect and the bases were loaded as Roseboro reached first base.

Maury Wills stepped to the plate with Larker in the on-deck circle. If Wills just got out without a run scoring, Larker could be the hero in the final at bat of the season and with a hit, win the NL batting title. It wasn't to be. Wills lifted a fly ball to left field deep enough to bring home Lillis from third and a 4-3 Dodger win. Larker would go back to the dugout wondering what might have been.

Groat would win the batting title by .19. What was it Crash Davis said in "Bull Durham?" Let me paraphrase; One more flair, one Texas Leaguer, one squib through the infield, one dink more on the season and you are a legend forever. Groat lives on as the legend, Larker is pretty much forgotten to all but baseball purists. Larker died in 2007 at the age of 76.