Mays and Aaron Blast Six Homers in One Game

EDS NOTE: Last week's column on Frank Howard solicited more feedback and comments as well as great personal stories of meetings with Howard than any other column of the past four years. Thank you.

TRIVIA WINNER: Congrats to Dylan Woodyatt, of Ontario, Canada, who correctly named Phil Ortega and Dick Nen as the only players in the Frank Howard trade who did not appear on a World Series roster. The Prize: Starbucks Gift Card.

It was April 30, 1961 when a mere 13,000 fans in Milwaukee County Stadium witnessed an historic yet bizarre game which saw Braves pitchers give up eight home runs to the Giants who scored 14 runs on those eight blasts. The historic part was Willie Mays had four of them! It was also the day the other "greatest" player of the era, Hank Aaron, blasted two homers in a losing cause. To be one of those 13,000 would have been a fans dream date.

Lew Burdette opened the game for the Braves and promptly served up a gopher ball to Mays hitting third in the inning. A blast to deep center. Billie Loes started for the Giants and gave up singles to Roy McMillan and Frank Bolling before Aaron took him deep for a 3-1 lead. 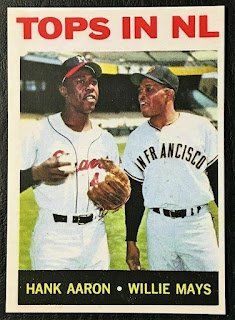 Things were quiet until the third when the Giants Jose Pagan lifted a Burdette pitch into the seats to make it 3-2. It was Pagan's first of two homers on the day as well. Three batters later and after Jim Davenport was  hit by a pitch, Mays took Burdette deep again, to left-center. Giants 4 - Braves 3.

Leading off the top of the fourth Orlando Cepeda homered to send Burdette to the showers and bring on Carl Willey. Felipe Alou greeted him with a home run. Just a few batters later Pagan would stride to the plate and belt his second homer of the game. Giants lead 7-3.

In the fifth Moe Drabowsky was pitching for Milwaukee and was the only pitcher to get Mays out that day. Willie lifted a flyball out to center fielder Aaron in a scoreless inning. By the sixth Seth Morehead was hurling for the Braves and with two men on faced Mays. Again Say-Hey would go deep; this time to left field for a three run blast. Giants 11-3. In the bottom of the inning Hammerin' Hank would take Loes deep one more time to make it 11-4. 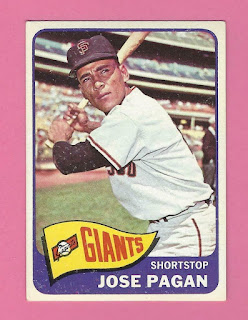 It was in the eight inning Mays would tie the record of four homers in a game and finish with eight RBI. This time with Don McMahon pitching Jim Davenport tripled in a run to bring Mays to the plate. Mays timed a McMahon pitch and again sent it over the left-center field wall. Final score Giants 14-Braves 4. Billy Loes went the distance for his second win.

In the end, who in the world would have ever guessed Hank Aaron and Jose Pagan hitting two homers in a game each, would be a footnote to history?