TRIVIA WINNER: Congrats to Jack Webster of Derry, NH, who correctly named Roy Sievers as the player the Phillies traded for to replace Pancho Herrera who was traded to Pittsburgh. The Prize: Starbucks Gift Card.

If 1968 was the year of the pitcher, and it was; how on earth did the Senators Frank Howard have one of his best years at the plate? Simply put; 6'7" 255 and a bat that looked like a tooth pick in his hands. While the rest of the Washington Senators were bumbling and stumbling around the .224 team batting mark, the 31 year old Howard was hitting .274. It had to be plain fear.

The Sens clubbed 124 home runs in 1968 which was good for fourth in the American League. Howard would blast 44 of them. Only Ken McMullen (20) and Mike Epstein (13) also hit homers in double figures.  Howard's 106 RBI accounted for almost 25-percent of the teams total. He was the only hitter with more than 20 doubles (28) far outdistancing the runner up, Del Unser with 13.

In a year when the league's batting leader hit .301, Denny McLain won 31 games and Bob Gibson's ERA was 1.12, Howard set marks which drove opponents crazy. Yet, only 12 of his 54 walks were Intentional. They could have pitched around him every time but maybe they feared this gentle giant of a man would just reach across the plate and send one into the Upper Deck. Maybe that's why he struck out 141 times but no one cared.

Never known for his speed he even had three triples although he didn't attempt to steal a base. Can you imagine the fear a shortstop might feel taking the throw with a lumbering Howard coming your way? It makes one cringe to think of such a career ending collision. 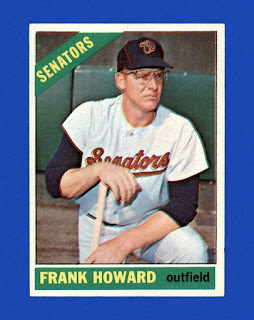 When Howard was traded from the Dodgers to the Senators everyone knew Los Angeles was giving up a slugger. What it got in return helped the Dodgers win pennants. It was expected to put butts in the seats in Washington.  It never did. Washington was last in attendance in 1968 and many other of Howard's earlier seasons with just over 500,000 fans coming through the turnstiles. And Howard played in almost every game, 158 of the 162 in 1968. Of course winning only 65 games probably had something to do with it. In fact, it wasn't until 1969 the Senators even came close to One Million fans.