TRIVIA WINNER: Congrats to Steve Tighe of Monaca, PA, who correctly identified Dick Schofield as the 1960 Pirates infielder who had the same batting average during the regular season as he did in the world series; .333. ** The Prize: Starbucks Gift Card.

Larry Jaster struck fear into the hearts of Dodger fans and hitters during the 1966 season but there was a World Series moment in time where Jaster made ironic history. First let's explore. He became known as the "Dodger Killer" or the "Creeper" because of the way he handled Los Angeles. Against the rest of the league he was well, rather pedestrian. And then there was that whole "Grand Slam" thing which you may be surprised to learn was more than just a World Series match up.

Jaster came to the Cardinals in 1965 as a reliever about to become a starter. The Redbirds had fine pitching including ace Bob Gibson, Nellie Briles and a young rookie by the name of Steve Carlton. Throw in Ray Washburn, Curt Simmons and Ray Sadecki and you had a formidable starting staff. Jaster got into four games, started three, completed all three, won all three and finished the season 3-0 with a 1.61 ERA. 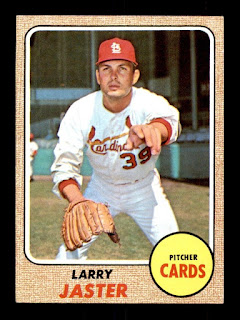 On September 17, 1965 he made his debut in relief of Curt Simmons and tossed a perfect 1-2-3 inning. It was, as history would dictate, against the Dodgers. Before the season ended he would beat Houston twice and the Giants once. When 1966 rolled around he would take aim at the Dodgers.

On April 25th he squared off against Claude Osteen. Jaster tossed a 7-hit shutout, striking out seven and walking none. He was 2-1. On the July 4th weekend he would face Los Angeles again, and again he tossed a shutout allowing just three hits in beating Don Drysdale. Jaster was now 3-2. Three weeks later he beat Drysdale again with a five-hit shutout, striking out eight to run his record to 6-2. 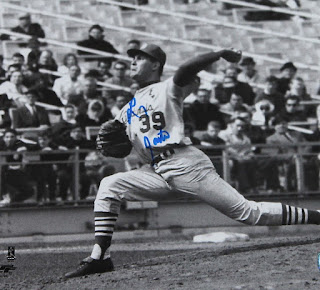 On August 19th, another shutout against the Dodgers. This time a five-hitter and he was now 8-3. On September 28th, in his final start of the season he faced rookie pitcher and future Hall of Famer, the late Don Sutton. Jaster ran his record to 11-5 with another shutout on four hits. Five straight starts against the Dodgers and five shutouts which combined with his one relief appearance the previous season means Jaster shutout Los Angeles 46 consecutive innings. Against the rest of the 1966 National League he was 6-5.

But it did not stop there because in the 1968 World Series Jaster came to grips with another legacy; the Grand Slam Home Run. He came in to relieve in Game 6; a game the Tigers would go on to win 13-1. The key was in a big 10 run inning, Jaster would face Jim Northrup. The significance might be lost on the average fan but not baseball historians. 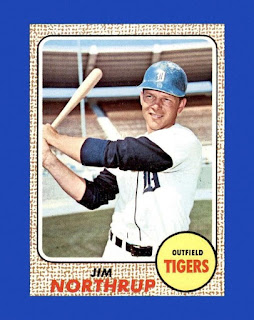 Northrup came to the plate with the bases loaded against Jaster. Northrup led the majors in 1968 by hitting four Grand Slam homers. A remarkable feat when you consider the all time, life time record for Slams was set by Lou Gehrig with 23. Jaster, as history would have it, gave up two grand slams himself in 1968.

It was analytics on steroids. It was the perfect match up of the guy with the most grand slams versus the guy who gave up the most grand slams, on the biggest stage in the sport. The result was to be expected; Northrup blasted a Jaster pitch into the right field seats to clear the bases. It made the score 8-0 and Jaster was removed.

When the series ended Jaster was gone to Montreal and he set another milestone; he threw the first major league pitch in Canada. He would finish the season 1-6 and moved onto Atlanta where by the end of 1972 his career was over.

During the 1970 season it should be noted he was involved in another bit or irony. He was struggling and in a game against his old club, Montreal, he faced former Dodger Ron Fairly. Fairly hit a grand slam and a few days later Jaster was back in the minor leagues.

Jaster ended his career with a record of 35-33 and forever many places in baseball history.