TRIVIA WINNER: Congrats to Steve Wade of McKinney TX, who correctly stated Whammy Douglas had two Topps cards which is one more than seasons played in the big leagues. And several of you commented on his glass eye. The Prize: Starbucks Gift Card.

Live Baseball Scores Any Time by clicking this link.

ANSWER to the Trivia question in the previous column: Whammy Douglas had two Topps cards which is one more than MLB seasons played.

On September 25, 1965 a mere 9373 people witnessed history in the nation's capitol. And what they saw was the best a man could give in a momentous moment. Up until that day, no Black pitcher had ever won 20 games in the American League. That is until the man they called Mudcat. Jim Grant had toiled in the big leagues seven previous seasons and while winning in double figures five times he never came close to winning 20. He would never come close again.

Grant was in the perfect place at the perfect time. The Twins were laden with sluggers Harmon Killebrew, Jimmie Hall, Don Mincher and Bobby Allison. Shortstop Zoilo Versalles was having an AL MVP season matched by few at his position at the time. The Twins were dominating while the Yankees had fallen on hard times and the Red Sox were yet to be a force to reckon with in 1965. 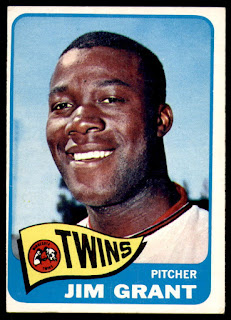 Sitting on 19 Wins, Grant only had one nemesis in this particular game; Don Blasingame, the light hitting second-sacker for Washington who would hit .223 on the season. He led off with a walk. In the fifth inning catcher Jim French also drew a walk. In the third, usually sure handed Frank Quilici booted a ground ball at second base allowing the runner to get on board. Two ground ball outs later Blasingame blasted a double for the only hit of the game for the Senators. Grant would force batters to hit 15 ground balls. All but one were recorded for outs including a double play. 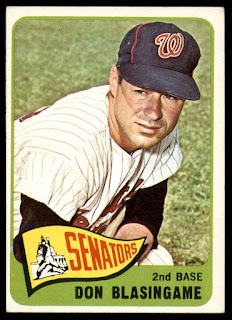 It can be surmised that if Quilici fields the ball cleanly, Blasingame never comes to the plate in that situation. No runners scored and Grant got Ken McMullen to ground out to end the inning. Meanwhile Versalles and the Twins were rocking. The shortstop banged a homer, a triple and a pair of singles for a four hit, 2 RBI day. Sandy Valdespino drove in a pair with a pinch hit and Tony Oliva plated another. Grant had singled before the shortstop came to the plate and scored on the home run.

When the dust had cleared Mudcat had faced 30 batters, three over the minimum, allowed only the one hit, walked two and struck out seven to run his record to 20-6 with a one-hit shut out of the Senators 5-0. When Willie Kirkland hit a ground ball to Quilici with two outs in the ninth and Don Mincher recorded the out at First, James "Mudcat" Grant's name was written into the record books 18 years after Jackie Robinson broke into big league baseball. Larry Doby broke the AL color barrier three months after Robinson on July 5, 1947 for Cleveland.

Grant died this past week at the age of 85. He would retire 145-119 with 54 Saves as he became a dynamite reliever.  Grant was 2-1 in four World Series games (3 with Minnesota, one with the A's), and he even blasted a 3-run homer in the 1965 Series, leading the Twins in a 5-1 decision. A Series they eventually lost to the Dodgers.