TRIVIA WINNER: Congrats to Ken Levasseur of Amherst, NH, who correctly identified Steve Bilko as the hitter who banged the last home run of the 1961 Angels inaugural season. It came as a pinch hitter. The Prize: Starbucks Gift Card.

ANSWER to the Trivia question in the previous column: Steve Bilko was the hitter who banged the last home run of the 1961 Angels inaugural season.

Most baseball fans know one thing about Harvey Haddix; he pitched a 13 inning near perfect game and lost. Harvey Haddix was much more than that. From his early days as a Cardinal to the days when he was traded to Pittsburgh in a deal which brought one of the best names in baseball history to St. Louis, Haddix was special. Very few people remember one season pitcher Whammy Douglas. He had more baseball cards than years played.

Few people remember how good Haddix (known as The Kitten) really was over a stretch of 14 years. Those years included 18 and 20 win seasons. Haddix was traded four times and over the stretch of just a couple of days he was sent from one team to another and back again. On August 30, 1965 the Orioles sold him to the Braves, only to get him back three days later. Imagine how that must have felt. There is much, much more to the life of Harvey Haddix but we will focus on one aspect here. 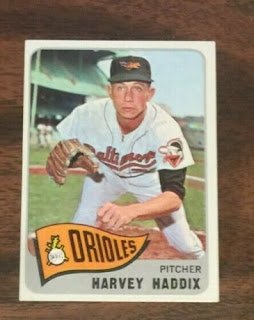 While his first win came in the 1952 season, his last victory on July 16, 1965 was a genuine achievement. Pitching for Baltimore he was no longer a starter but a trusted reliever who performed many roles in his final season. His last start came in 1963 with Pittsburgh. In mid July, 1965 with a 2-0 record, The Kitten found himself in a tight battle with Tigers in Detroit.

Milt Pappas and Denny McLain started the contest but after three, Pappas was gone while McLain stuck around into the eighth inning. Dave McNally and Stu Miller followed Pappas. With the score tied 1-1 in the ninth, Haddix was called upon to keep Detroit at bay. The only O's run by this time was a long blast by Boog Powell.

Haddix entered the ninth and with one out issued a walk to Jake Woods. He got Dick McAulliffe to hit into a double play. That was unusual because McAulliffe rarely hit into twin killings. 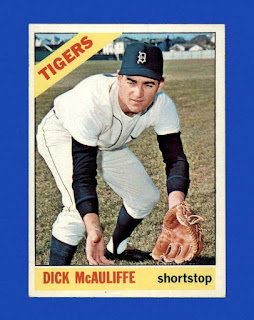 In the 10th Norm Cash hit a one out double and after an intentional walk to Al Kaline, Willie Horton hit into a double play.

In the top of the 11th Brooks Robinson doubled to lead things off and then the roof fell in on pitcher Larry Sherry. Facing Curt Blefary, Sherry uncorked TWO wild pitches and Robinson came around the score to make it 2-1. The 5'9" Haddix would enter the game for the last time as a pitcher with a win on his record.

After a pair of fly ball outs by George Thomas and Don Wert, he issued a walk to Bill Freehan. Don Demeter followed with a pinch-hit single and the dangerous McAuliffe strode to the plate. As if he were back on the mound in his heyday, Harvey reached back and sent three strikes past the Detroit second sacker and the game was over. Haddix was 3-0. He would finish 3-2 on the season and his lifetime record of 136-113 with a respectable 3.63 ERA came to a close a few months later. Harvey Haddix died in 1994 at the age of 68.