TRIVIA WINNER: Congrats to Mickey Bauchan of Flint, MI, who correctly identified Luke Walker as the pitcher who gave up Orlando Cepeda's final home run while he was playing for Kansas City against Detroit  in August 1975. It figures a reader from MI gets the question about a Tigers player giving up the gopher ball. LOL. The Prize: Starbucks Gift Card.

ANSWER to the Trivia question in the previous column: Luke Walker was the pitcher who gave up Orlando Cepeda's final home run while he was playing for Kansas City against Detroit in August 1975.

He was one of many who were supposed to be the next Mickey Mantle. An inspiring looking player at 6'3" 190 lb., he ended up falling far short, and was just Roger Repoz. The slugging outfielder with the cannon arm, Repoz came up to the Yankees in late 1964 but became a platoon regular in 1965. As Mantle was winding down, Repoz was supposed to be heating up. It never happened.

Repoz batted a lowly .220 with 12 homers that first year in the big leagues in just 218 at bats. In a full season that would have translated to about 25 home runs. Certainly with a .260 average that would have caught the attention of Yankee brass and endeared them to keep him around longer. In 1966 after only 43 AB in 37 games (used mostly as a pinch-hitter) Repoz was dealt to Kansas City. It seems he had fallen so far from the heir apparent wagon the trade was one of journeymen, and Repoz. 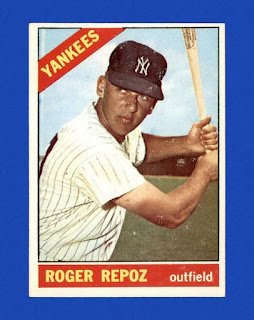 (Beware the Month of June, as Repoz was traded three times, three times in June)

In June, Repoz was traded by the New York Yankees with Gil Blanco and Bill Stafford to the Kansas City Athletics for Billy Bryan and Fred Talbot. None of which were up and coming stars but rather guys who were at the end of their careers trying to hang on. Talbot would stick around for a couple of years in a Yankee uniform. The trade didn't help Repoz. He finished the 1966 campaign with 11 HR and .232.

He was batting .241 with a pair of homers in 40 games before the A's gave up on him. He was sent packing to the Angels for Jack Sanford and Jackie Warner. He batted .250 for the Halo's to finish at .247 with seven dingers. Over the next five years he would hit 52 homers and never hit higher than .240 with some dismal years in the middle of that. 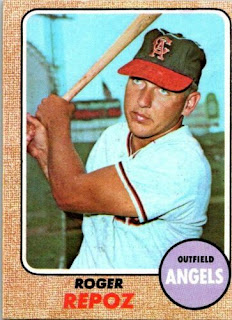 When the Angeles gave up on him by sending him to the Orioles in June of 1972 for Jerry Davanon, he was sent to AAA Rochester. He played out the season and then after being traded three times in the middle of June (twice on June 10th) Repoz chose another route. He went to Japan to play ball.

He spent the next five seasons playing for more than one Japanese team and hit 122 home runs over five seasons before retiring at age 36. He did have a dubious distinction. In 1971, Repoz became the first player in MLB history to compile an OPS of greater than .700 while putting up a batting average of under .200 (.199) and playing in a minimum of 100 games.