TRIVIA WINNER: Congrats to Tim Fealy of Punta Gorda, FL who correctly stated the first team Harry "the Hat" Walker managed was the St. Louis Cardinals when he was a player manager for the 1955. He got his first full time managerial job with Pittsburgh in 1965. The Prize: Starbucks Gift Card.

ANSWER to the Trivia question in the previous column:  Harry Walker first managed in the big leagues in 1955 as a player-manager with the Cardinals.

They were called the "free swingers" back in the day. Two phrases by the way which are so cliche' today. One certainly has a different meaning and the other is referenced often by a younger group which never experienced "back in the day." And in today's terminology I'll put a big "LOL" after the last line. While this column is about the free swingers of 1969, it should be noted that two of the six players highlighted below were on the field for another record breaking night. See the video below.

We however, are talking about the players who played in the big leagues who rarely went to first base via the Base on Balls. For some reason it was the National League which had more of these "non walkers." In fact, the six of the seven players we researched all were NL players in 1969. The breakdown came with players who approached 500 Plate Appearances. Maybe it was because it was the first year of divisional play, but that is hard to imagine. The DH was still four years away and the year of the pitcher was the season before. Why they were more prominent in the NL over the AL, is a mystery.

The top two players in this category were Manny Sanguillen of the Pirates and Tommy Helms of the Reds. Both players failed to reach 20 walks in the 1969 season. Sanguillen came to the plate 481 times and walked only 12. He was known as a guy who could hit a ball that was a foot off the plate into the corner for a triple.

Helms, the Reds second sacker, strode to the plate 509 times and drew only 18 walks. Neither player by the way struck out very much either. The rest of the players in the group all drew walks in the low 20's. The only AL player on the list (others such as Rich Reese were close) is the Royals Jerry Adair with 20 Walks in 461 PA. 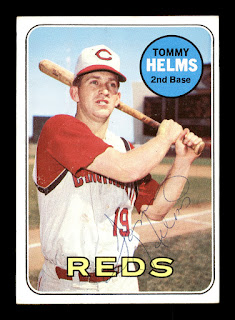 Andy Kosco of the Dodgers was known as a hitter with power, which would lead pitchers to work around him. Not so. Kosco only walked 21 times in 453 Plate Appearances. Al Oliver of Pittsburgh also drew 21 walks in 502 PA. Roberto Pena of the newly branded San Diego Padres was on par with Oliver. He drew 21 Walks in 501 PA. 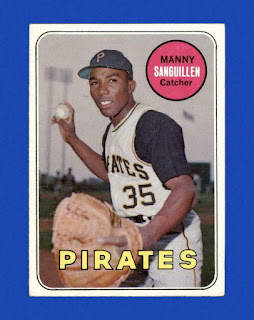 It is an interesting breakdown when you consider there was some power and very few strikeouts to go along with those even fewer Walks. Sanguillen by the way only drew 223 BB in 13 seasons averaging only 17 Walks per year.