The Law of Averages and the Fall from Grace; 1961 Pirates

TRIVIA WINNER: Congrats to Chuck Riffee of Mineral, VA, who correctly identified Tommy Davis, Ron Perranoski and Jim Gilliam as the three Dodgers who finished in the top 10 in MVP balloting after the 1963 season. The Prize: Starbucks Gift Card.

ANSWER to the Trivia question in the previous column:  The three Dodgers who finished in the Top 10 of the MVP balloting after Sandy Koufax won it in 1963 were Jim Gilliam, Ron Perranoski and Tommy Davis.

The 1961 Season for the World Champion Pittsburgh Pirates was more than a fall from grace. It was written in the Law. Vernon Law. In the first game since the Bill Mazeroski game winning homer in Game 7 of the 1960 World Series, the Bucs would win the opener behind Bob Friend in 1961. Despite Law pitching a masterful outing in Game Two, they lost. Law, the 20 game winner and ace of the staff in 1960 went 8 innings, allowed 7 hits and just one earned run, losing 2-1 to the Giants. It was the highlight of his 1961 campaign.

The Pirates would hold their own until June when it was evident they were not the same team as the World Series winners the year before. Actually many of the hitters had better years. Dick Stuart upped his average to .303 and banged 35 homers compared to 23 the year before. Roberto Clemente batted .351 and Don Hoak .298. Dick Groat, the 1960 NL MVP dipped from .325 to .275 and while Smokey Burgess batted .303 the bench guys fell miserably. Left Fielder Bob Skinner was on his way out as well dropping from 15 homers .273 to .268 with just three dingers. 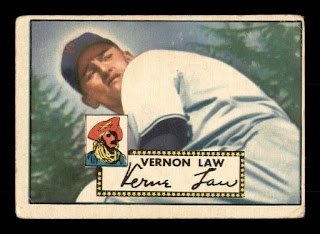 Rocky Nelson and Dick Schoefield both hit over .300 the previous year and both fell to under .200 in the new season. The pitching, mainly the bullpen suffered dramatically both in performance and age. Three of the key relievers were past 33 while five of the pitchers counted on to start were 30-plus. And then there was Law. The change in career projection came about before the World Series.

His career was derailed by an injury to his ankle sustained on the bus trip on which the team was celebrating clinching the 1960 pennant. Law was forced to change his pitching style and pitched in pain for the rest of the season and the World Series. Because of his weak ankle, he tore some muscles in the back of his pitching shoulder during the Series. He thought the injury would heal over the winter, but he was not the same for several seasons.