The Day the Astros were not Losers

TRIVIA WINNER: Congrats to Dennis Cimpl of Wauwatosa, WI, who correctly stated when Vernon Law won the Cy Young Award in 1960 the only category he led the National League and the Major Leagues in was Complete Games with 18. The Prize: Starbucks Gift Card.

ANSWER to the Trivia question in the previous column:  In 1960 when Vernon Law won the Cy Young Award the only major category he led the NL and MLB in, was complete games with 18.

We'll start this column with a single question? What do Denny Lemaster, Curt Blefary and Norm Miller have in common? The simple answer is these three journeyman players combined to assure the Houston Astros would, for the first time ever, finish at least .500 on the season in club history.

(This is the entire actual broadcast of the game detailed in this column, with Vin Scully)

From Opening Day 1962 until the final series of the 1969 season, the Astros (previously the Colt 45's) never came close to .500. It would be several years later before they actually had a winning record but right now we're talking about 1969.

The club had 80 wins heading into the three game series with the Dodgers September 30, and needed to win at least one of the three to secure a .500 mark. It came in game one. Lemaster, the Braves castoff started against 17 game winner Don Sutton. Los Angeles too was playing out the string lingering in fourth place in the NL West, as the Braves were on their way to clinching the division. 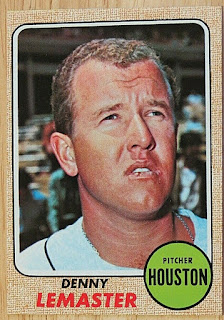 Lemaster was masterful that day but part of this legendary story features the crafty lefty with his bat as well as his arm. In the fifth with Houston leading 3-2, Joe Morgan singled and stole second. Jay Alou moved him to third on a ground ball and Blefary, the Oriole's cast-off, brought him home with a fly ball, making it 4-2. It proved to be the go ahead run and the most important run of the season for Houston.

The next inning Denis Menke hit a one-out double and came in to score the insurance run on Lemaster's RBI single. In the eighth Miller cracked a solo homer off Jim Brewer to finish the Astro's scoring to secure the victory. Lemaster meanwhile went the distance pitching a 4-hitter, striking out 11 in a 6-3 win.

The Astros had won 81 and hoped to split the final two games to finish over .500. Los Angeles won the next game, leaving it up to the final game of the season. It went down to the final batter. With the score tied in the bottom of the ninth 4-4 in game 162, former Dodger Jack Billingham uncorked a wild pitch to Ted Sizemore with Bob Stinson on third, to give the Dodgers a 5-4 victory. The loss went to Fred Gladding and it was the only batter Billingham faced.

Lemaster would finish 13-17 with a 3.16 ERA in what would be his last good year. He played three more years in Houston but never achieved better. Blefary banged 12 homers in 1969 and was traded after the season to the Yankees for Joe Pepitone. He would bounce around for a few years before ending his career in San Diego. The AL Rookie of the Year with Baltimore in 1965 he never achieved the promised success. Miller remained a utility player of lesser note for a few more years, finally traded to Atlanta for Cecil Upshaw in a deal involving aging veterans toward the end of their baseball lives. But the three baseball lives which crossed on September 30, 1969 assured one thing in Astros' history. They were no longer losers.