Score & Wynn; They Gave their All to Cleveland & Chicago

TRIVIA WINNER: Congrats to Douglas King of Chicago, Illinois, who correctly identified the Cincinnati Reds as the team three great pinch-hitters played for; Red Lucas, Jerry Lynch and Smokey Burgess. The Prize: Starbucks Gift Card. NEW TRIVIA CONTEST:  IF YOU ANSWER THE TRIVIA QUESTION CORRECTLY YOU WILL BE ENTERED INTO A WEEKLY DRAWING FOR A Starbucks Gift Card.  YOU MUST ENTER VIA THE EMAIL AT THE END OF THIS COLUMN. DON'T FORGET TO PUT YOUR MAILING ADDRESS IN WITH THE ANSWER SO WE CAN SEND YOUR GIFT IF YOU WIN.

ANSWER TO TRIVIA QUESTION IN THE PREVIOUS COLUMN:  The Cincinnati Reds was the common team for three great pinch-hitters; Red Lucas, Jerry Lynch and Smokey Burgess.

Two of the great pitching names in baseball had careers which channeled into the 1960s with less than spectacular endings. Both Herb Score and Early Wynn showed periods of domination on the mound and tried to carry it through to the decade of the "60s, but it wasn't to be. They can both be claimed by Cleveland and Chicago. One career a short eight seasons, the other 23 years. They were teammates for much of their careers, forever tied to each other. In Cleveland they were together from 1955-57, while from 1960-62 they hurled for the White Sox.

For Score, his story is well documented. A 20 game winner in only his second year in the big leagues finishing the first two seasons at 36-19. In the first inning a line-drive to his face off the bat of Gil McDougald, cost him much of his vision for a while and virtually ended his dominant career.  Wynn took the mound the very next game. While Score did fully recover, he was never the same. Some believed he changed his delivery because he feared another such incident. Score denied it, saying he suffered an arm injury which caused him to change his delivery. 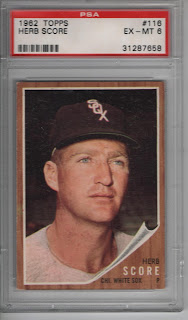 Score was so powerful he struck out 508 batters in his first two seasons. He only struck out 329 the final six seasons of his career. After the line drive he pitched three more seasons with Cleveland going 13-15 and was sent to the White Sox for Barry Latman to start the 1960 season. Never regaining his form, he was 5-10 in 1960 and 1-2 in a dozen games the next two years. He called it quits after the 1962 season and eventually wound up in the Indians broadcast booth where he enjoyed a highly praised career. He died in 2008 at the age of 75.

Early Wynn (and who could doubt that was the perfect name for a pitcher) began his MLB career in 1939 with Washington! In 1943 he was 18-12 and playing for the lovable losers in DC his record didn't get going consistently. Then he ended up in the military towards the end of WW II. Coming out of the War, he was still up and down. Winning 17 one season, losing 19 the next. Then came the change of scenery. 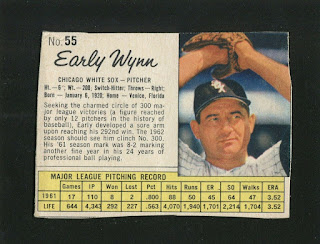 In 1948 he was traded by the Washington Senators with Mickey Vernon to the Cleveland Indians for Joe Haynes, Ed Klieman and Eddie Robinson. He quickly paid dividends and over the next 10 years with the Tribe he won 164 and lost 102, four times posting at least 20 wins in a season, three times winning at least 17. With Cleveland he never had a losing season until his 10th when he was 14-17 for the sixth place Indians. He still led the league in strikeouts and made the All-Star team.

The Indians shipped him to the White Sox December 4, 1957 with Al Smith for Fred Hatfield and Minnie Minoso. In 1959 at the age of 39 he led the AL in starts and Innings Pitched, winning 22 games. By the time 1960s came along he was 40 years old and NOT ready to hang them up.

Father Time has a way of changing things however and Wynn took his final four seasons into 1962 with records of  13-12, 8-2, 7-15 and 1-2. For the final season he was released and resigned by Cleveland where he ended his career. In 23 years (plus one for Uncle Sam) Wynn won exactly 300 games and lost 244. If it wasn't for the miserable years in Washington, his record might have rivaled even more of the all-time greats.