The Two-Sport Players of the 1960s

TRIVIA WINNER: Congrats to Alan Drooz of San Diego, CA, who correctly stated that Hank Aaron had 21 Sacrifice Bunts during his career. . The Prize: Starbucks Gift Card. NEW TRIVIA CONTEST:  IF YOU ANSWER THE TRIVIA QUESTION CORRECTLY YOU WILL BE ENTERED INTO A WEEKLY DRAWING FOR A Starbucks Gift Card.  YOU MUST ENTER VIA THE EMAIL AT THE END OF THIS COLUMN. DON'T FORGET TO PUT YOUR MAILING ADDRESS IN WITH THE ANSWER SO WE CAN SEND YOUR GIFT IF YOU WIN.

ANSWER TO TRIVIA QUESTION IN THE PREVIOUS COLUMN: Hank Aaron had 21 Sacrifice Bunts during his career int he Big Leagues.

While there have been many players who have played in more than one professional sport there are only four men who played in both the NFL/AFL and MLB in the 1960s - playing for both during the decade. With the Super Bowl upon us, this seemed like a great time to point that out, especially considering none of them are household names.

Tom Brown is an interesting story. Signed by the Senators in 1963 as a 22-year old free agent he played in 61 games. He fielded well, not committing even one error playing the outfield and first base, but the old adage of "good field no hit" took it's toll. He batted .147, and struck out nearly half the time. He gave up on baseball and while drafted by Buffalo of the AFL, chose to sign with Green Bay of the NFL. He played six seasons with the Packers including starting at Safety in the first two Super Bowls. In 71 NFL games the defensive back had 13 interceptions and returned kicks as well, adding a punt return for a TD to his stats. He finished his career with one final season in Washington.

And then there was Norm Bass. Of the four Bass had the most impact in baseball. The promising right-hander opened his career with the Kansas City A's in 1960 by going 11-11, with a 4.69 ERA. All that belies the fact he started 23 games, completed six and tossed a pair of shutouts. Winning 11 games for a team which only won 61 and finished in 8th place out of 10 teams, was pretty spectacular. At age 22 he led the team in wins. 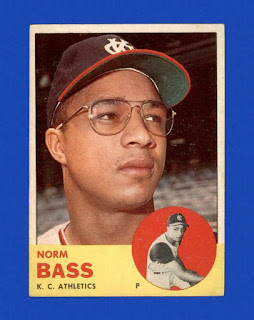 The following season Bass's ERA ballooned to 6.09 and while he started 10 games, pitched only 75 innings and was 2-6. He would never again achieve what he promised in his rookie season. The following season, his last in MLB he pitched in only three games and finished his career 13-17. He signed with the Denver Broncos for the 1964 season as a defensive back, and got into only one game. That ended his professional career.

Johnston was an outfielder with the Pittsburgh Pirates in 1964 when he came to the plate 10 times, drawing three walks and failing to get a hit. By that time he'd already tried his hand at football. In his only NFL season, 1960, he was a return man for the Steelers. He wasn't bad but evidently didn't make the grade, despite returning 12 punts and 18 kick offs for just under 500 yards. He did have a 38 yarder. 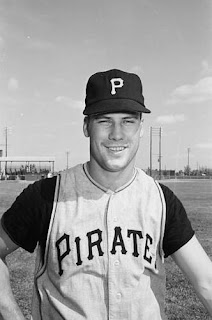 Look's career was a short one in the Bigs, spending one season with the White Sox where in 1961 he failed to get a hit in six AB's at the age of 23. He did make contact, striking out only once. He made just as big an impression the following year with the New York Titans, carrying the ball twice for a total of 9 yards before ending his professional career. 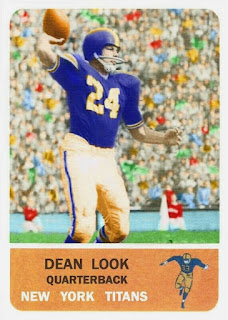