TRIVIA WINNER: Congrats to Rich Klein, of Plano, TX who correctly stated there were three players named in last week's column who went on to manage; Gil Hodges, Roger Craig and Maury Wills. The Prize: Starbucks Gift Card. NEW TRIVIA CONTEST:  IF YOU ANSWER THE TRIVIA QUESTION CORRECTLY YOU WILL BE ENTERED INTO A WEEKLY DRAWING FOR A Starbucks Gift Card.  YOU MUST ENTER VIA THE EMAIL AT THE END OF THIS COLUMN. DON'T FORGET TO PUT YOUR MAILING ADDRESS IN WITH THE ANSWER SO WE CAN SEND YOUR GIFT IF YOU WIN.

ANSWER TO TRIVIA QUESTION IN THE PREVIOUS COLUMN: The three players mentioned in last week's column who went on to manager in the big leagues were Gil Hodges, Roger Craig and Maury Wills.

Gates Brown is widely known as one of the best pinch-hitters in major league baseball history and while he did have seasons where he played a lot more than as a substitute hitter, 1968 would prove to be that magical season. It was so magical for Brown that the Strat-O-Matic Game Company chose to list one of his positions as "pinch hitter" on his game card. For SOM fans, like yours truly, this was a phenomenal achievement.

Brown was held back in the starting line-up by slugging Willie Horton. Horton's 111 homers from 1965-68 with a pair of 100 RBI seasons, was good reason to keep him in the line-up in left field. With HOFer Al Kaline patrolling Right there was no place for Brown to play on a regular basis. When he did play, oh did he hit.

Brown only started 17 games in the outfield and played one game at first base during the 1968 season. He fielded everything which came his way. At the plate he was unbelievable. He hit .370 for the season, with 34 hits in 92 at bats with 7 doubles, 2 triples and six Homers. It was in the clutch and in the pinch where he really excelled. In 49 substitute AB's he hit .450. He struck out only four times that season. 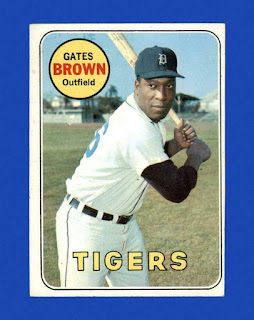 The Red Sox hated to see him come to the plate. April 11 he pinch hit a homer in the 9th for a 4-3 win, August 10, another pinch dinger against the Red Sox, August 11th in the first game of a double header his game winning homer came in the 14th inning 5-4 while in the second game he had the game winning RBI in the 9th.

"I always wanted to get a hit every time I went to the plate, but this was one time I didn't want to get a hit," Brown said later. "I'll be damned if I didn't smack one in the gap and I had to slide into second — head first, no less."

The result was as expected. Mustard and ketchup and smashed hot dogs and buns all over him. As you would expect the fielders and his teammates couldn't stop laughing. When asked about it later by Smith, Brown said he was hungry and where else could you eat a hot dog and have the best seat in the house?

Brown only had one at bat in the 1968 World Series, failing to get a hit. In his career, he did have other worthwhile years with 1964 being his best. He hit .272 with 15 home runs in more than 400 ABs. The following year however, Horton made his big splash and Brown sat more often, derailing what might have been a much better career. He'd finish his 13 seasons with 2545 ABs and 84 homers with a .257 average. No one will ever forget 1968 however, especially fans of SOM.