UECKER For the Hall - OOPS he's already there!

TRIVIA WINNER: Congrats to Rich Klein of Plano, TX who correctly identified Daryl Patterson and Pat Dobson as the two players who led the Detroit Tigers in Saves in their 1968 Championship Season. The Prize this week: Starbucks Gift Card.

ANSWER TO TRIVIA QUESTION IN THE PREVIOUS COLUMN: Daryl Patterson and Pat Dobson were the two Detroit pitchers who led the Tigers in Saves in 1968.

Bob Uecker would never make the Hall of Fame for his playing days, he never managed and he certainly wasn't an executive contributor. For his "contributions," the elevation and the "fun" of baseball he certainly should be. Besides that, the lifetime part time, .200 hitting catcher who holds the dubious distinction of being in the Top 10 all time for Passed Balls in a season despite only playing 76 games, Bob Uecker homered off of Hall of Famer, Sandy Koufax.

In his later days as a broadcaster (which is why he is in the Hall), comedian, and ambassador as Mr. Baseball, Uecker often joked the homer he hit off Koufax that day could have kept the Dodger Ace out of the Hall of Fame. Not likely, but as one of the 14 home runs Uke hit in his career, it was an important one, if only for a day.

It was a beautiful and balmy July 24th evening game in 1965 when the St. Louis Cardinals invaded Dodger Stadium. The Cards were a .500 club, the Dodgers were a game up in first place in the National League. L-A's best pitcher was on the mound facing Ray Sadecki in a battle of lefties. The house was nearly full with a pair shy of 49,000 fans in attendance. It was Dodger baseball at its best. 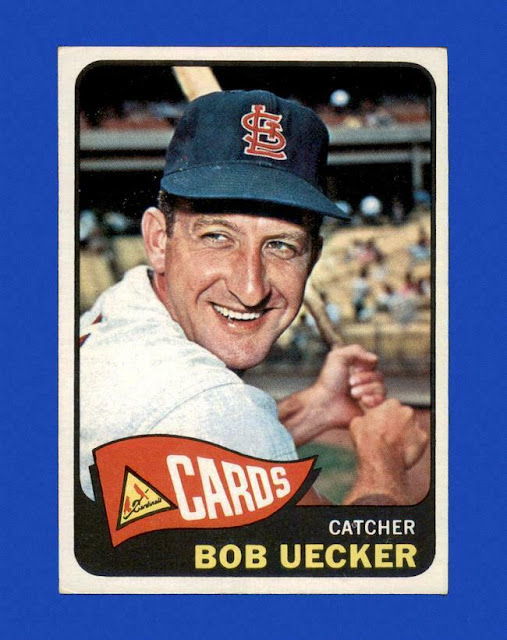 A pair of sacrifice flies by Lou Johnson and Ron Fairly gave the Dodgers a 2-0 lead into the fifth. With two out in the fifth, Uecker approached the plate as he always did knowing he was unlikely going to get a hit. Add the blazing Koufax on the mound and Uke figured a third out was a sure bet. He couldn't have even felt bad if the Dodgers walked off the field (ala Satchel Paige) and let Koufax do it all on his own. That didn't happen, but what did happen was pure magic.

Uecker found a pitch to his liking, or maybe Koufax let one slip (nah, for fun's sake we'll let Uecker play Super Man here). Uecker took Sandy deep to left and outta here for a home run. As Uecker rounded the bases he was probably in more shock than anyone of the 48,998 fans in the park. The score was now 2-1.

Curt Flood would later hit a sac fly to tie it up and after nine it was still tied 2-2. Don Drysdale pinch hit for Koufax and Ron Perranoski came in to pitch the 10th. A muffed fly ball by centerfielder Willie Davis brought home the unearned run and the Cards went on to win 3-2 in 10 innings.

As it figured Uecker's home run was the only hit which drove in a run in the entire game. Three sacrifice fly balls and an error on another fly ball confirmed the other runs scored. A moment of "greatness" for Uecker? Sure why not. Although the year before he did get two hits off Koufax in a game, so maybe he had Sandy's number. Nah.

That milestone for Passed Balls? In 1967 he caught 59 games for Atlanta and allowed 10 Passed Balls. It can be argued he was the catcher for Phil Niekro and his knuckleball. He often joked the best way to catch a knuckleball was to wait until it stopped rolling and pick it up. That season he was traded to the Braves by Philadelphia and finished the season with 76 games played and a league leading 27 Passed Balls!

For the record Uecker hit .200 lifetime, 14 homers, 74 RBI with his best season being 1966 with Philadelphia. He only hit .208 but drove in 30 runs (almost half his lifetime total and whacked 7 of his 14 career homers. And he fielded one of his best seasons .985 allowing only four Passed Balls. Unfortunatley he only threw out 12 of 44 base runners for a miserable 27%. It wasn't his worst in that category either.

And YES -- He still belongs in the Hall and it is a show of the best of humanity that he IS in Baseball's Shrine.