Lou Brock Set the Tone from the Start

TRIVIA WINNER: Congrats to Steve Wade of McKinney, TX who correctly named the Dodgers and Braves as the two teams which drafted Tom Seaver, but who eventually after some legal wrangling, signed with the Mets and became a legend. The Prize: Starbucks Gift Card.

ANSWER TO TRIVIA QUESTION IN THE PREVIOUS COLUMN: The Dodgers and Braves were the two teams which drafted but were unable to secure the rights to Tom Seaver who eventually signed with the NY Mets.

You might say Lou Brock set the tone for a Hall of Fame career almost as soon as his trade from the Cubs to the Cardinals was complete. The date of the trade which sent Brock to St. Louis, essentially for Ernie Broglio was June 15, 1964. Brock would arrive that same day and fail as a pinch-hitter in the Cards 9-3 loss to Houston. However, he was ready the following day.

Brock started in right field against the Colt 45's and proceeded to show off the speed the Cardinals so sorely lacked at the time. Batting second in the order behind Curt Flood, Brock drew a walk, but was left stranded there when Bill White lined into an inning ending double play.

After failing to get aboard in the third he got a single to center in the fifth. His speed allowed him to move up, over to third on an error and a ground out. Ken Boyer slashed a triple to bring him home for his first run as a Cardinal. The very next inning Brock slashed his own triple to left but wasn't able to score. 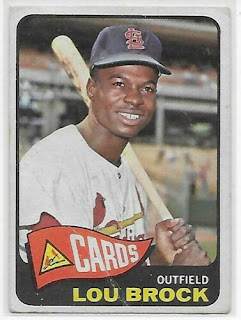 In the eighth he drew a walk and stole second for his first as a Cardinal and 11th of the season. Again his St. Louis teammates could not bring him home. As St. Louis closed out Houston 7-1 Brock finished two-for-three, two walks and a stolen base. Not bad for his full time debut.