TRIVIA WINNER: Congrats to Rich Klein of Dallas, Texas, who correctly answered last weeks Trivia Question that Wally Moon's first at bat Home Run came as a member of the St. Louis Cardinals. Rich is the winner of the PSA Graded 6 Wally Moon Topps 1960 baseball card.  Thank you for everyone who participated and this week you are playing for a Starbucks Gift Card by answering the next trivia question. Instructions on how to enter are directly below. Thank you to the many who submitted winning answers. This week is a new week and a new Trivia Contest.

ANSWER TO TRIVIA QUESTION IN THE PREVIOUS COLUMN: Former big leaguer Wally Moon, recognized by many for his home runs at the Los Angeles Coliseum as the "Moon Shots," recorded a home run in his first at bat. It came as a member of the St. Louis Cardinals during the season in which he was named NL Rookie of the Year.

Mention the name Dick Stuart and you get two reactions; 1) Dr. Strangeglove & 2) Home runs. Both are warranted and you might say well deserved reputations. Even looking at the lifetime statistics and the history of players at his position, one has to agree both titles fit.

Stuart came up in the late 1950's and immediately became a hit, a home run hit with the Pittsburgh Pirates. Through the 1960's the dual reputation was aptly applied.  While platooning with Rocky Nelson at first base for the pennant winning 1960 club, he smacked 23 homers. The following season was the first time he cracked 30 in the big leagues (which he did three times) by banging 35 while batting .301.

Hitting 35 home runs was no easy task in spacious Forbe's Field. Remarkably, his split home and away was pretty close. He hit 16 at home and 19 on the road. Stuart's hitting prowess would continue but the Bucs had an up and coming slugger named Donn Clendenon, who was being groomed to play first. 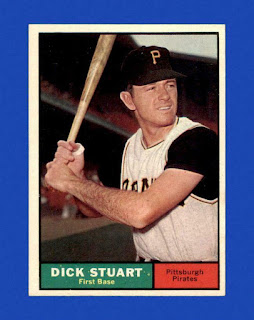 After the 1962 season in which he slumped badly to .228 and only 16 home runs, the Pirates shipped him to Boston along with pitcher Jack Lamabe for reliever Don Schwall and catcher Jim Pagliaroni. It was a trade which benefited both clubs. Pagliaroni became the Bucs regular catcher for a few years and Stuart took advantage of the Green Monster in Boston. Lamabe and Schwall had less than spectacular careers and bounced around after the trade.

In his first season in Boston, Stuart slugged 42 homers and led the league in RBI with 118. The interesting thing about this particular season is Stuart hit 25 of his 42 home runs in Boston, 17 on the road, but 37 of the 42 came off right-handed pitching! It must be remembered because of the Wall in left, opposing clubs rarely started leftys against the Red Sox.

He followed it up in 1964 with 33 dingers and 114 RBI before he was sent to the Phillies for pitcher Dennis Bennett. His 28 homers were second only to Johnny Callison on the 1965 Phils. It was his last productive year. He finished up with short stints on the Mets, Dodgers and Angels before calling it a career in 1969. 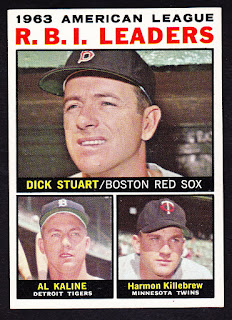 When it comes to Stuart's prowess as a fielder, seven times he led his league in errors committed at first base. His lifetime fielding average was a paltry .983. Perhaps more importantly he is listed as no. 42 on the all time list of first baseman with the most errors in a career with 169. Before you jump to any conclusions; ahead of him on that list are Lou Gehrig, Willie McCovey, Sunny Jim Bottomley, Andres Galarraga and Charles Comiskey. All had longer careers than Stuart however.

For the record, Stuart belted 228 homers in what amounted to 10 seasons in the big leagues, batting .264 and committing 169 errors, while striking out more than 100 times in seven different seasons. He never won a Gold Glove, but he did get MVP votes on multiple occasions.  In the minor leagues twice he hit 30 or more home runs and in 1956 while playing A-Ball in Lincoln he set the minor league record with 66. The following year he hit 45.