ANSWER TO TRIVIA QUESTION IN THE PREVIOUS COLUMN: Felix Mantilla hit the second most home runs on the 1964 Boston Red Sox, with 30 behind Dick Stuart's 34.

Willie Crawford was a phenom coming out of high school in Los Angeles who probably would have benefited more if Major League Baseball had the foresight to have changed its rules to help young players. Crawford, the son of former UCLA D-Back Willie Crawford, didn't have quite the career the Dodgers envisioned.

NOTE: For point of clarity, Willie Crawford did play in the minor leagues for parts of seasons from 1964-1968. However, it was the bonus baby rule which kept him in the big leagues for parts of the first couple of seasons. The article is meant to discuss how the BB rule really hurt players careers by forcing clubs to "force feed them." Thank you. 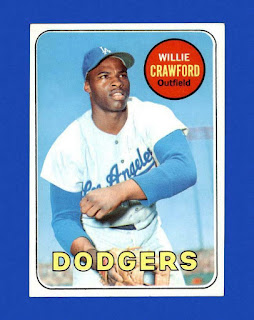 He was a stud at Fremont High School. He had 9.7 speed in the 100-yard dash and could hit a baseball a ton. To say he was highly recruited as a running back by major colleges including those in Los Angeles, was an understatement. However, the Dodgers took notice too. Tommy Lasorda signed the budding star to a $100,000 Bonus Contract two days after he graduated high school.

Here is the rub. MLB rules at the time for Bonus Baby signings stated the player had to be on the roster and play that season and the next season. It was 1964 when Crawford made his much anticipated major league debut. He should have been in the minors, at least no lower than AA. He was barely 18, celebrating his 18th birthday a week earlier. Few, if any youngsters are ready for the limelight of the big leagues as teens, especially not in front of 56,000 in Los Angeles.

He made his debut on September 16, 1964 as a fifth inning pinch-hitter for Jim Brewer against the Pirates Vern Law. Crawford popped out weakly to shortstop Dick Schofield. Three days later as a pinch runner he scored his first big league tally. A couple of games later he was again used as a runner. Eight days after making his first appearance he got his first hit; a pinch hit single off Larry Jackson. He would get 14 more at bats in September with four more hits to finish with a .313 BA, a stolen base and a caught stealing.

Over the next three years he would garner only 5 hits in 62 games in the big leagues.  Again, he should have been in the minor leagues to stay. The only bonus was, he was close to home. It was 1969 before he finally got to play on what can be considered a regular basis, with 129 games and 389 AB's. He batted .247 with 11 home runs. 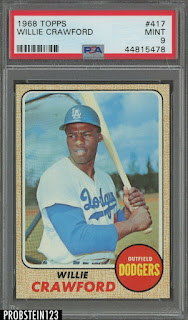 Crawford would do better in the 1970's hitting 14 homers and batting .295 in 1973. He was traded several times, and after a 14 year career ended with 86 homers and a lifetime .268 batting average. For all his speed it is hard to imagine Willie Crawford ended his career with 47 stolen bases in 83 attempts, or less than four steals per year on average. High lights of his career included getting the only two hits off Gary Nolan of the Reds in a 4-0 loss, and a pinch hit and a stolen base in the 1965 World Series against Minnesota.

Crawford died at the age of 57 of kidney disease. He is buried in Los Angeles.