TRIVIA QUESTION: One of the key players in the Orioles 1966 run to the World Series, would finish his career with three seasons playing for the next team to win the AL pennant; the Boston Red Sox. Who was that player?

ANSWER TO TRIVIA QUESTION IN THE PREVIOUS COLUMN:  While Frank Robinson's 1966 Triple Crown year gave him 49 home runs to lead the AL, he was followed by Harmon Killebrew with 39, and teammate Boog Powell who hit 34.

While the 1966 Baltimore Orioles were a barn burner led by Frank Robinson's Triple Crown season, the 1967 season was a super flop. No one could have expected Robinson to repeat but his .311 average coupled with 30 homers and 94 RBI was nothing to sneeze at. The rest of the team, especially the pitching, simply fell apart.
The Orioles went from on top of the world to sixth place the next year. They went from 34 games over .500 to nine games under .500. What happened? 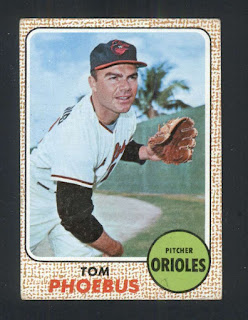 Only one pitcher, Tom Phoebus won in double figures. His 14 wins at least doubled everyone on the staff except Jim Hardin who was a major bright spot. Hardin, a 23 year old rookie, led the starters with a 2.27 ERA in 111 innings while going 8-3. Aside from the continued dominance of Moe Drabowsky as the closer (1.60 ERA in 95 innings) the rest of the staff was pretty much a disaster. Injuries didn't help. 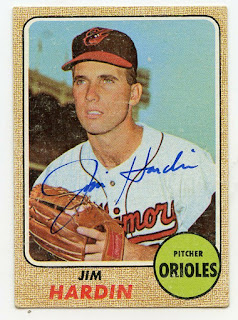 Jim Palmer (a 15 game winner in 1966), Dave McNally, Wally Bunker and Steve Barber combined for 48 wins in the championship season. They had 17 in 1967. The bullpen remained fairly solid but overworked. Palmer only pitched 49 innings due to arm problems and was actually sent to the minors and then had surgery before restarting his Hall of Fame career.

At the plate, Boog Powell went from 34 homers to 13, Russ Snyder went from .306 to .236, Luis Aparicio dropped 40 points and stole fewer bases because of it, while Curt Blefary, Paul Blair and Andy Etchebarren all were very close to the previous season's marks. Brooks Robinson was almost exactly the same at .269 and hitting 23 and 22 home runs. His teammates didn't help. In 1966 he drove in 100 but only 77 the following season. 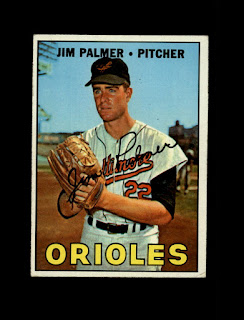 The bench did under perform but the club made only a handful more errors and gave up only three fewer earned runs than the previous season.  Perhaps the best explanation after the injury and pitching woes were the Red Sox. It was Yaz's time to take over the Triple Crown and Boston finished 15+ games ahead of the Orioles and went on to face the Cardinals in the World Series.

Hardin by the way would win 18 games the following season and win 17 more the rest of his career, never again matching his first two seasons.