TRIVIA QUESTION: What was the cost of Dodgers Stadium when it was built?

ANSWER TO TRIVIA QUESTION IN THE PREVIOUS COLUMN:When the 1967 Angels acquired Don Mincher they also picked up 1B/OF Len Gabrielson for insurance. He only played in a few games before being shipped across town to the Dodgers for the Super Minor Leaguer of the Century, Johnny Werhas. Werhas played half of his major league career in 1967 for the Angels, finishing with a lifetime record of 198 AB's, two homers and .173 BA in 89 career games. Gabrielson would have a couple of his best years with the Dodgers before finally retiring after the 1970 season.


In case you were counting there were a total of 11 new Major League Baseball Stadiums making their debuts in the 1960's. It seems pretty remarkable when you consider until 1960, there were only 16 big league teams in existence. Granted, of the 11, five were built directly for their new expansion teams, three were built as those expansion teams grew older and more profitable, and three were built for teams who moved from other cities. Only one, Busch Memorial Stadium in St. Louis was for a long term existing team. 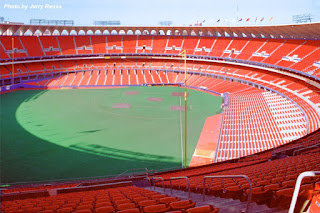 (Busch Memorial)
New stadiums needed to be constructed for expansion teams. Colt Stadium was the place debuting for the Houston Colt .45's while Jarry Park became the new home of the Montreal Expos. The expansion San Diego Padres played their home games in Jack Murphy Stadium. 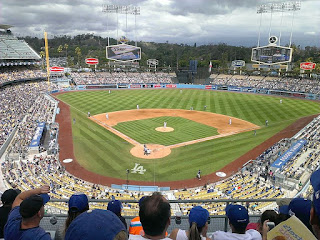 (Dodgers Stadium 1962)
When the Braves fled Milwaukee for Atlanta the new park was Atlanta's Fulton County Stadium. The Giants saw the opening of "the Stick" which was Candlestick in San Francisco a couple of seasons after leaving New York. Dodgers Stadium broke ground in 1959 after the team moved from Ebbets Field in Brooklyn to the Los Angeles Memorial Coliseum. The club occupied the new ballpark starting in 1962.

It would be a couple seasons before the expansion Mets moved into newly constructed Shea Stadium and then came the ninth Wonder of the World; The Houston Astrodome in 1965 for the Astro's who changed their name from the Colt .45's. 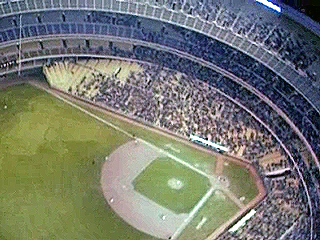 (Shea Stadium 1964)
The situation with Robert F. Kennedy Stadium (RFK) in Washington and Texas Arlington is a little convoluted. The original Senators moved to Minnesota, so the new Senators, an expansion team, moved into the new DC Stadium (later named RFK after Kennedy's assassination). They stayed there until they moved from Washington to become the Texas Rangers in Arlington. While the Rangers did not come into existence until the 1970's, the stadium was actually built in the 1960's, so we must include it in the list. The new Washington Nationals would eventually play at RFK decades later.

There were a lot of firsts. The biggest of which was the first indoor domed stadium; the Astrodome. It was the kind of stadium the Dodgers Walter O'Malley wanted to build in Brooklyn and which would have kept the Dodgers in New York. When he couldn't get it, it sealed the deal to moved to Los Angeles. 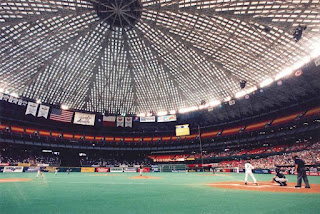 (Houston Astrodome)
The Astrodome truly was a wonder. It opened the door to something new; synthetic turf or Astoturf due to the lack of sunlight.  But you could play without the mosquitoes which plagued Colt Stadium, and you could actually play in rain and cold weather. Below is a list of stadiums opened in the 1960s.