TRIVIA QUESTION: After the 1962 playoff loss, Williams was known as the GOAT (not the Greatest of All Time), and was shipped off after the season to the New York Yankees. Who did the Dodgers get in return for Williams?

ANSWER TO TRIVIA QUESTION IN THE PREVIOUS COLUMN: In 1962, when Dodger Stadium opened, the final cost to build the latest "new" ballpark was $23 million.

If there was ever a team which showcased the essence of power, hitting, pitching and overall depth and balance it was the 1962 San Francisco Giants. They won 103 games and finished tied with their arch rivals; the Los Angeles Dodgers at the end of the regular season. This was a club which hit 204 home runs led by Willie Mays (49), Orlando Cepeda (35), Felipe Alou (25) and Willie McCovey (20). Four players hit .300 or better and another five batted higher than .290. Mays drove in 141, Cepeda 114. On the mound Jack Sanford won 24 games, Billy O'Dell 19, Juan Marichal 18 and another 16 for Billy Pierce. Only Pierce threw less than 260 innings, which is an amazing statistic by today's standards. 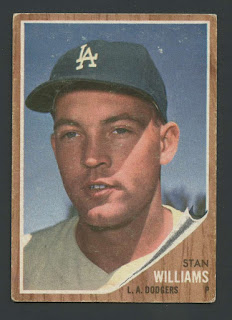 It really came down to game no. 162. The Giants beat the Astros, 2-1 to win game no. 101. The Dodgers squared off with the Cardinals and if they had won the final game, would have finished with 102 wins and won the pennant. Alas, while Johnny Podres allowed only five Cardinal hits, one of them was Gene Oliver's 14th homer of the year. Curt Simmons meanwhile allowed only five hits and the Dodgers couldn't get a man past second base. The Oliver homer held up and the Dodgers fell to St. Louis 1-0. Thus the Giants and Dodgers ended up in a tie and a best of three game playoff was scheduled.

The two clubs split the first two games and it came down to the final game of the season (no. 165)  with the Giants winning 6-4 in Los Angeles, with Don Larson getting the win over Ed Roebuck.
(Game One with a bunch of home runs and a Giants victory.)
It is remembered as boiling down to one of the most frustrating innings in a history of frustration between the two. For Dodger manager Walt Alston it was all pretty much beyond his control as performers must perform, and they did not as Dodgers but they did as Giants.

The game was scoreless until the third when San Francisco scored two runs on three Dodger errors. Starter Podres must have been fit to be tied as he himself got the trouble going with an error. 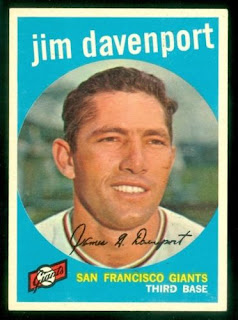 The Dodgers battled Giant ace Juan Marichal into the eighth, with a home run by Tommy Davis being the only long ball of the contest. The Dodgers forged ahead, getting one run on a Giant error, and into the ninth Los Angeles led 4-2. The Giants used every bit of their depth and Dodger ineptitude going into the sporadic ninth inning.

Matty Alou led off the inning with a single and one out later Willie McCovey drew a walk. A walk to Felipe Alou loaded the bases and Alston decided to leave Roebuck in to face Willie Mays who promptly singled in a run making it 4-3. Stan Williams replaced Roebuck with the bases loaded. The game before Williams had a blown save but ended up picking up the win in a Dodger comeback. In this game he faced Orlando Cepeda who flied out to tie the game with a Sac Fly.
(Williams years later still regretting the walk to Davneport)
Then came the infamous play. Williams uncorked a wild pitch to Ed Baily sending Mays to second and into scoring position, placing runners at 2nd and 3rd.  An intentional walk to Baily set up the killer. Williams then "unintentionally" walked Jim Davenport to bring the go-ahead run across, 5-4. Jose Pagan hit a ground ball to Larry Burright who muffed it for the final error putting icing on the cake 6-4. The Dodgers went quietly in the bottom of the inning, giving San Francisco 103 wins and the pennant. They lost 4-3 to the Yankees in the World Series.

Please share this blog with your friends and colleagues and leave a comment at the bottom of the blog if you have one. Thank YOU VERY MUCH!! Please pick up a copy of my book "Tales of My Baseball Youth; A Child of the 60's" at www.bobbrillbooks.com, or on Amazon.
Posted by Baseball in the 1960s at 11:38 AM