TRIVIA QUESTION: Mike Cuellar came to the big leagues in 1959 but after one short season didn't get back there until 1964. It wasn't until 1966 that he became a star. How many times did this lefty win 20 games or more in a season?

ANSWER TO TRIVIA QUESTION IN THE PREVIOUS COLUMN:When  the New York Mets opened the club's first season it was a sign of things to come. They lost to the Cardinals 11-4 in their very first game. They went on to lose 9 in a row and 12 of 13 and finished with the worst ever 120 games lost. The Colt .45's on the other hand went the opposite way - to start. The Colts beat the Cubs 11-2 and won their first three games. They ended up 64-96 on the season. The Mets would be the first of the two to end up in the World Series however, taking the 1969 title. It took Houston into the next century to get there.

When a young team has a starting pitching staff averaging 24.2 years old, you wonder what kind of future it has. The 1969 Kansas City Royals laid the groundwork for greatness, even though it didn't really work out that way. 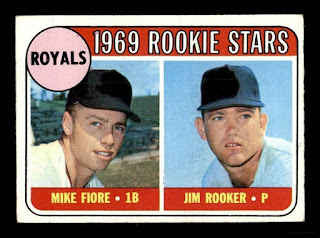 Wally Bunker, Dick Drago, Bill Butler, Jim Rooker and Roger Nelson looked like the second coming with the end of the decade. It was these pitchers who were ushering the Royals into the 70's and between them they won 43 games and none were over 3.90 in the ERA department. Pretty impressive for a team which won only 69 games and finished fourth in the AL West.

Four of these starters averaged 200 innings with only Rooker well below at 158. Young arms maybe used up too quickly, but they showed promise. Backed by a few veteran relievers such as Moe Drabowsky (33) and Dave Wichersham (33), they didn't get much support from their hitters. The club only hit 98 home runs and had a team BA of .240. They finished 9th in runs scored and 8th in hits. 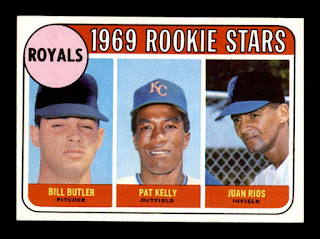 In the field they were not much better finishing 10th in fielding percentage and in errors with 157. Ellie Rodriguez was the veteran catcher at age 23 and future star Buck Martinez was a 20 year old backstop. He would also make his mark as a manager after his playing days were over. These starting pitchers were not getting a lot of help from experience at this point.

In the end the five went onto careers which looked like this; 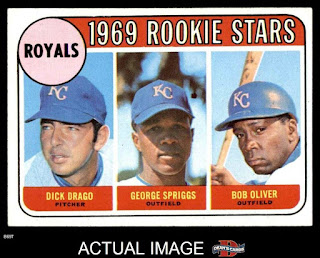 Butler would have a short career, missing two seasons and while he won 9 games in 1969, he would only win another 14 in his career which ended in the mid 1970's with 24 wins and 35 losses.

Nelson would spend another five years in the big leagues finishing his career with a 29-32 record with his best being in 1972 with an 11-6 season. 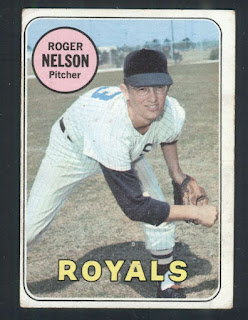 Rooker made the most of his career, even getting into the World Series with Pittsburgh. Six times he would win in double figures, twice knocking out 15 win seasons and finishing 103-109 with an impressive 3.46 ERA in 1810 innings pitched for a 13 year career which ended in 1980. He pitched an inning in the 1979 Series. Rooker appeared in four post season games.

Rooker's claim to fame in the 1969 season actually came as a hitter, where he smacked four homers in 57 AB while hitting .281. He later became a Pirates broadcaster.