TRIVIA QUESTION: 1962 Saw the debut of the two expansion teams; The Mets and The Colt .45's (later the Astros). How did those two teams fare on opening day 1962. The Mets played the Cardinals, Houston took on the Cubs?

ANSWER TO TRIVIA QUESTION IN THE PREVIOUS COLUMN: When the Dodgers gave up on Stan Williams at the end of the 1962 season and blown playoff series, they sent him to the Yankees in a trade. They got Bill "Moose" Skowron in return. Skowron played one season for the Dodgers hitting .203 with four homers, before moving on to the Senators, the White Sox and the Angels. Williams revived his career pitching for five other teams before bring his career to a close. He twice on in double figures including a 10-1 season with the Twins.


Some days it just doesn't pay to get out of bed. Such was the day for Joey Jay and Bob Miller of the Cincinnati Reds on April 9, 1962. It was Opening Day and the 28, 506 fans who showed up at Crosley Field on a beautiful spring day, deserved better.

Spring was in the air and the Reds were playing their first regular season game after losing the World Series to the Yankees almost six months previous. They were coming off a 93 win season and the Phillies had lost 107, finishing in last place in the National League, 46 games back of the Reds.

Jay had a 21 win 1961 season and Miller was pitching for the first time in the big leagues since 1956, due to spending the previous fours years in the military. It was a common occurrence in those days.  Miller had shown some promise before that. This season was the beginning of the end for the 6'1" lefty. 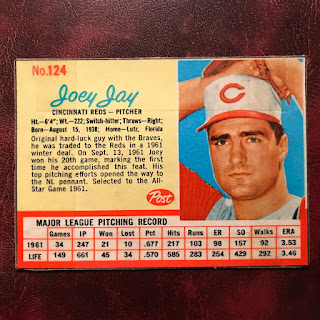 The game started nice enough. After a scoreless first, catcher Clay Dalrymple took Jay deep to right for this first homer of the season. He would hit 10 more on the year. Phillie starter Art Mahaffey was keeping the powerful Reds in check. A Gordy Coleman single was about all the Reds could muster early on. 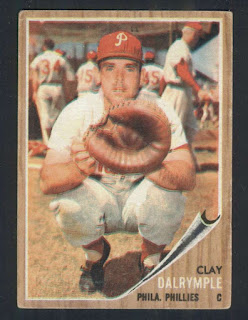 Then came the third, and four of the first five Philadelphia batters got singles to drive in two more making it 3-0 with runners on first and second and Jay was done. Manager Fred Hutchinson brought in lefty Miller to face lefty hitting Dalrymple who promptly singled to make it 4-0. Ruben Amaro and Mahaffey both got hits followed by a SAC Fly and when the dust settled it was 6-0 Phils. Most of those runs charged to Jay.

Miller would start the fourth by hitting Tony Gonzalez who was thrown out trying to steal. A walk to Roy Sievers set up a two run jack by Don Demeter making it 9-1. Despite a Cincinnati rally in the fourth the damage had been done. When the dust cleared the Opening Day crowd left early with their NL Champions going down to defeat to the lowly Phils 12-4. 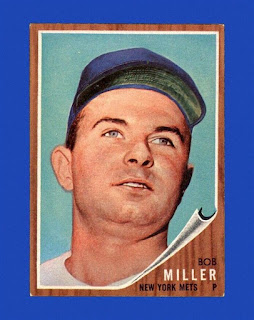 Jay would go on to win 21 games again in a season which saw the Reds improve to 98 wins but finish third. The Phillies would really improve, winning 81 games and finishing in seventh place.

Bob Miller would pitch in 6 games, toss 5 innings and record a 21.94 ERA for the Reds before being shipped off May 7, with Cliff Cook to the fledgling New York Mets for Don Zimmer. Miller would toss 20 innings for New York and register a 7.08 ERA while splitting four decisions. He was out of baseball the following season at age 27. His best season was 1954 with a 2.45 ERA in just under 70 innings.