Hoyt Wilhelm; Lots of Answers, Too Many Questions

TRIVIA WINNER: Congrats to Ken Levasseur of Amherst NH, who correctly identified the Cubs' Billy Williams as the player who officially replaced the injured Pete Rose on the NL 1968 All-Star Roster. The Prize: Starbucks Gift Card.

ANSWER to the Trivia question in the previous column:   In the 1968 All Star Game Pete Rose was voted in as one of the three outfielders in the game. Due to injury he was replaced by Billy Williams officially.

In the era of the 1960's there probably was not a more dominant relief pitcher than Hoyt Wilhelm. Uncharacteristically he was also one of the most traveled pitchers of his era. During the 60's, he switched teams four times. During those years his ERA was under 2.00 six times and another three times it was less than 2.65.

Only in 1960 did he miss the mark with a respectable 3.31 ERA. Of course he tossed 147 innings, pitched in 41 games and started 11 of those. He was coming off a season where he led the league in ERA at 2.19, pitching a career high 226 innings. Who could blame him for being a bit tired? 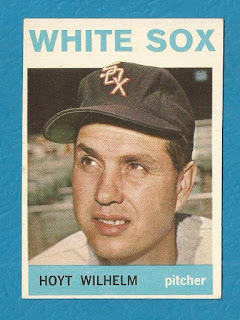 If you were wondering how he did it, it was the famous knuckle-ball which led his repertoire. How many knuckler's he threw during his 1103 (2254 in his career) innings during the era, no one will ever know. The key here was he averaged 110 innings per season while four times eclipsing 130. All but three games were in relief and he never started after 1960. For the 1965 White Sox he went 144 innings, giving up only 88 hits and striking out 106 on his way to a 7-7 season with a 1.81 ERA.

In the midst of all of this was the fact Wilhelm was 37 years old when the decade of the 60's began. He was still five years younger than the newly elected President John F. Kennedy. Known as "Old Sarge," to really put it in perspective and indicative of Wilhelm's career was in 1968 he pitched in four of final six games in the White Sox season. It was Chicago's worst season of the decade, 36 games out of first place. What makes this short little string so amazing is; Wilhelm was 45 years old.

The only downside to his career came in 1961 and he really wasn't to blame. As Roger Maris was chasing the Babe on his way to 61 home runs, Wilhelm was brought in specifically to keep Maris from hitting the ball out. 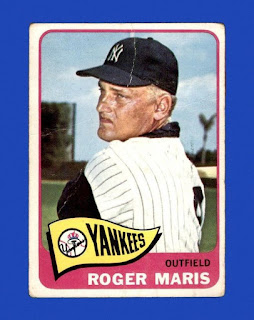 It was game 154 for New York and Orioles manager Lum Harris brought in the knuckle-baller to pitch to Maris in the latter's final at-bat. Maris had 59 home runs. Commissioner Ford Frick had ordered that if anyone were to break Ruth's record it would need to be in the same number of games the Great Bambino had played in, 154. Not the 162 played in 1961.

In the film 61*, Harris orders Wilhelm to not throw anything but the wiggly knuckler. Hitting a knuckle-ball high and deep is tough enough but with the pressure building and the obvious move to stop Maris, all the Yankee slugger could manage was a weak ground ball. He would not "break" Ruth's record then, by Frick's rule. 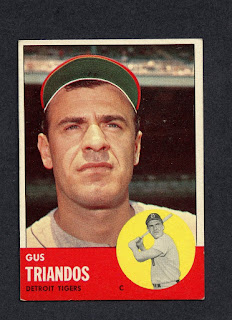 During his career Wilhelm pitched for nine teams and was elected to the Hall of Fame. During the 1950's he tossed a no-hitter. Overall, he won 124 games in relief, saved 228, pitched in 1070 games, his lifetime ERA was 2.52 with a lifetime WHIP of 1.1. He led both leagues in ERA once, and the NL twice in Win-Loss percentage.

He also threw 90 Wild Pitches and due to the nearly exclusive use of the knuckle-ball the number of passed balls by catchers is far to many to count. His former catcher Gus Triandos is quoted as saying "Heaven is a place where no one throws a knuckle-ball."

When you figure he didn't enter the big leagues until he was 29 years old and retired at 50, it makes him one of the most amazing stories in baseball history. His only post season action was in 1954, pitching two scoreless innings for the Giants. In the 1960's his average salary was $28,000 a season.