The Most Boring but Nearly Tragic All-Star Game; 1968

TRIVIA WINNER: Congrats to Marc Griffen, of Clinton, OK, who correctly identified Steve hamilton as the AL player who was traded with Don Rudolph and also played in the NBA. The Prize: Starbucks Gift Card.

ANSWER to the Trivia question in the previous column:  Steve Hamilton was the player who was traded with Don Rudolph and who also played in the NBA.

Since baseball fans were treated to another boring All-Star Game it brings to mind one of the worst AS games in big league history, but one of the most memorable. It was 1968, the year of the pitcher, when the AL Batting Average leader would hit .301, Denny McLain would win 31 games and Bob Gibson's ERA was 1.12 with a WHIP of .083. It was also the year a substitute player scored the only run of the game and was named MVP, and one of the all-time great sluggers of the AL nearly ended his career making a Defensive play. 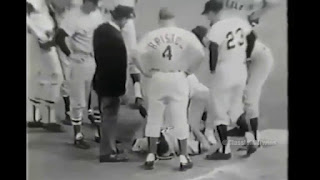 Willie Mays didn't make the AS team in 1968, nearing the end of his career. He hit .289 with 23 home runs. He was fourth in the fan voting behind Hank Aaron, but he was selected. With players missing the game due to injuries or wanting days off, Mays was inserted as the lead off hitter for the game at Houston's Astrodome. Facing Luis Tiant, he singled to left. With Curt Flood at the plate Tiant picked Mays off first. However, Tiant mishandled the play for an error and Mays was safe at a second base. 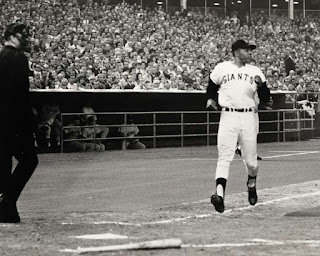 Tiant then uncorked a wild pitch moving Willie to third. Flood walked putting runners at first and third. Willie McCovey grounded into a double play, scoring Mays and aside from one other nearly tragic, moment, that was it. The game would end 1-0 with Mays being named MVP.

However, in the bottom of the third with one out Flood hit a ground ball to deep short which Was handled cleanly and on to first. Harmon Killebrew stretched for the throw to get the fleet footed Flood and did the splits. Below is a link to the video.

"I heard it split like a rubber band," Killebrew said in a later interview. He had ripped his hammie away from the bone and was not only done for the game but for the season. He would come back in 1969 to belt 49 homers.

There is little much else to say about this game except it reflected the year of the pitcher. The two teams combined for 8 hits and ONE unearned run. Nuff said.