The Story Book Game NO One Remembers

TRIVIA WINNER: Congrats to Dan Taguchi of Los Angeles, who correctly identified Dick Stuart as the aging slugger the Dodgers acquired down the stretch in 1966. The Prize: Starbucks Gift Card.

There are meaningless games across the spectrum of every season but even in those seemingly meaningless encounters there are little nuggets of history which change the course of human life. Such as the case on May 8th, 1963 in the game between the Washington Senators and the Cleveland Indians at D-C Stadium. Only 7, 047 fans were there that night and a whole lot fewer when the real excitement took place in the 13th inning. But let's not get ahead of ourselves.

It was an early season game and even though hopes are high in May, the Washington Senators were pretty much already out of the race. They were 11-16 and the Indians were 10-10. The Senators would finish 56-106 in 10th place,  48.5 games behind the Yankees.

What was significant about this game is both starting pitchers pitched into the 13th inning. Jack Kralick took the mound for the Indians in what would be a 3:08 game. Don Rudolph, one of the fastest pitching moundsmen in MLB was on the hill for Washington. The same Don Rudolph who was married to, by this time, retired burlesque queen; Patti Waggin. 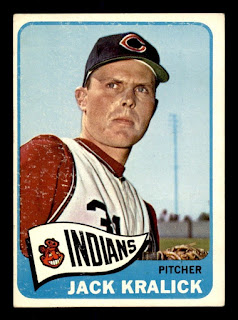 The two pitchers kept on going, matching each other pitch for pitch. The Sens finally broke through in the sixth when light hitting Ed Brinkman doubled and Rudolph sacrificed him to third. He came home on a Jim Piersall Sac Fly to tie the game 1-1. 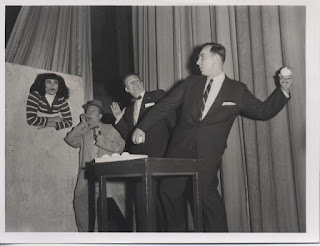 (Rudolph in a publicity stunt with Stripper wife; Patti Waggin)

Nine times Rudolph would face three up and three down. Kralick for his part did the same eight times. These two journeymen pitchers were pitching the games of their lives. Then came the 13th, the unlucky 13th for some folks.

In the top of the inning de la Hoz led off with a single. With one out Johnny Romano, the slow footed catcher, belted one in the gap and ended up on third with a triple to score de la Hoz. The Indians had broken the tie, now leading 2-1. Rudolph struck out pinch hitter Al Luplow but Vic Davalillo singled to bring home Romano and it looked like the game was out of reach, 3-1.

Rudolph got Willie Kirkland and they went to the bottom of the 13th with Barry Latman taking over for Kralick. Brinkman started the inning off with a base hit to right and Dick Phillips, pinch-hitting for Rudolph did the same. Brinkman took third and the Sens were in business. Lefty Ron Nischwitz came in to relieve Latman.

Nischwitz had come over from Detroit in a deal for Bubba Phillips in 1962. He'd spent much of his time in the minors but started this season with the Indians. The 25 year old had only one decision on the young season and he lost it. He came into face Ken Retzer who was batting for Piersall. Manager Birdie Tebbits lifted the left-handed hitting Retzer for the right handed batting Marv Breeding to face lefty Nischwitz. 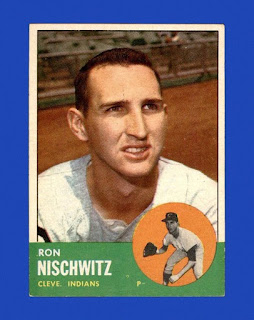 Breeding singled to right sending Phillips to third and allowing Brinkman to score, making it 3-2 Indians. Minnie Minoso hit a ground ball to third but Phillips, trying to score was thrown out at the plate. Breeding took second on the throw and that put runners at second and third with one out. They walked Chuck Hinton to load the bases and set up a double play.

I happened to be doing research for my film script on Rudolph when I spoke to Nischwitz several years ago about this game. The conversation went like this.

"I know this is one game in a career 50 some odd years ago, Ron, and I don't expect you to remember much," I asked when he suddenly jumped in.

"Bob, I remember it like it was yesterday," the retired player and college baseball coach told me.

And in a game like this you certainly would. Right fielder Don Lock stepped to the plate. Lock had not had a hit of Kralick. With the bases loaded Nischwitz delivered and Lock connected. He sent a towering fly ball to the wall in right field. Kirkland went to the wall and timed his leap perfectly. He jumped up, grabbed the ball in his glove for what should have been the third out.

As fate, or bad luck would have it, Kirkland did catch the ball but as he was coming down with it, it rolled out of his glove and over the fence for a grand-slam home run. Ball game over, the final Senators 6, Indians 3. Nischwitz said he slammed his fist into his glove and had such an angry look on his face in the locker room, "no one would talk to me."

The Senators, especially Lock and Rudolph, were thrilled and while the rest of the season didn't amount to much for Washington, it turned out really sour for Nischwitz. It was a matter of a couple weeks before he was sent back to the minors. In that season he would pitch only 14 innings, giving up 12 earned runs. He would get only one more decision the rest of his career which ended back in Detroit in 1965. He won his only game that season and pitched respectfully with a 3.40 ERA in 20 games.

Nischwitz would go on to become a successful college coach at Wright State University in Dayton, Ohio, for 29 years before retiring in 2004. As a big league pitcher he had one very good season leading Detroit with 48 appearances out of the bullpen in 1962 and even managed a big league batting average of .278, batting .417 in 1962.

1963 was Breedings final season in the bigs, being sent to the Dodgers before the year ended. Retzer never fulfilled his potential and despite having a decent utility player season he was out of baseball after the 1964 season. He played in 237 big league games.

Lock's you might say "had a career." He remained a steady presence in center for Washington for several years and banged some home runs but his lifetime average of .238 kept him above the radar and he was finally sent packing to Philadelphia for reliever Darold Knowles. 1963 was pretty much his best season hitting .252 with 27 home runs.

Kirkland, the key player in the game when you come right down to it, had a parallel career to Lock. They both were low average hitters with some power. Aside from a few games with Baltimore, Kirkland would spend his entire career with Washington. After the 1963 season he was traded to Baltimore for Al Smith and less than a year later the Senators purchased him back.

For Rudolph, the journey man pitcher, this was his finest game of a career which lasted more years in the minors than in the big leagues. At the age of 31 this would be a dismal year for him, finishing 7-19 with a 4.55 ERA, allowing 28 home runs. It should be noted the Senators were terrible and Rudolph, who pitched Opening Day in 1963 had his highlights. He pitched in front of President John F. Kennedy that day on what would be JFK's final opening day appearance.

Rudolph pitched one more season in the big leagues, his sixth, mainly in relief closing with a record of 1-3. Washington wanted to send him to the minors to start the 1965 season but after breaking into baseball as a phenom in the early 1950's he decided to hang them up. He was part owner in a trucking business in California. In 1968 while driving a company truck, it is believed the brakes went out and he rolled the vehicle. He was killed on September 12, 1968 at age 37.

His career ended 18-32 but he was extremely well liked. Known as a practical joker the late Jim Landis once told me Rudolph convinced him to go to the local burlesque show where Rudolph's wife Patti Waggin was performing. The set up was when Patti tossed one of her pieces of clothing into the audience it would land squarely on Landis' head. It did.