The Hawk VS. Charlie O.

ANSWER TO TRIVIA QUESTION IN THE PREVIOUS COLUMN: The NL MVP in 1962 was the Dodgers' Maury Wills.

The year 1967 was one of the strangest a ballplayer ever had. It gave him an out, an in, and a new lease of life and all because he opened his mouth. The player was Ken "the Hawk" Harrelson.  The Kansas City A's of the 1960s were ruled over by the man baseball loved to hate; Charlie O. Finley.

Whether it was wanting to deploy orange baseballs and other gimmicks or trying to sell his three best players for millions of dollars in a salary dump (which was voided by commissioner Bowie Kuhn), Charlie O. was pretty much a side show. He was the sideshow Harrelson could not abide. The day after Finley fired manager Alvin Dark with the team record at 52-69, Harrelson was quoted in a Washington newspaper calling Finley "a menace to baseball." He later said he never used the word "menace." Finley released Harrelson who was hitting .305 with six homers in 61 games.

That action took place August 25. Three days later Harrelson signed a lucrative deal with the World Series bound Red Sox. The Sox were in need of a power hitting outfielder since Tony Conigliaro was beaned and out for the season. While he only hit .200 for Boston, he did drive in 14 runs, smack 3 homers and get 16 hits in 23 games. 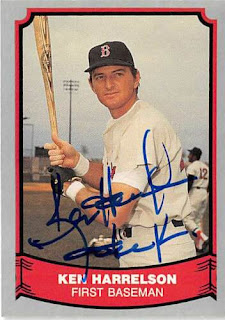 In the Series, which the Red Sox lost, Harrelson could only manage a lone single off Cardinal pitching. It wasn't a great performance but he made up for it the following season by leading the AL in RBI with 109 and belting 35 home runs while batting .275 in his finest season.  He was still cranking homers in 1969, but the Sox wanted more and sent him in a deal on April 19, 1969. He was traded by the Boston Red Sox with Dick Ellsworth and Juan Pizarro to the Cleveland Indians for Joe Azcue, Vicente Romo and Sonny Siebert. But, he refused because of his business interests in Boston. Moving out of Massachusetts to Cleveland was going to cost him a bundle. He decided to retire.

After a meeting with the commissioner and a reworking of his contract, the deal went through and Harrelson ended up with 30 homers and 92 RBI despite a .221 BA. After the 1969 season he would play only 69 more big league games before calling it quits. In the midst of all that he broke his leg while sliding in spring training, opening the door to be replaced by Chris Chambliss.

He tried professional golf for a while before coming back to baseball as a successful play-by-play announcer. He also had a brief stint as a team executive with the White Sox and was known for making several mistakes. One of them was trading Bobby Bonilla to the Pirates for Jose DeLeon while also firing Tony La Russa as field manager.