Yaz; One Great Year Among Many!

TRIVIA QUESTION: In is career Carl Yastrzemski twice led the AL in the number of double plays grounded into. What was the most he had to lead the league?

ANSWER TO TRIVIA QUESTION IN THE PREVIOUS COLUMN:  One of strangest cases involving losing pitcher stats came in 1966 when the Pittsburgh Pirates (who had some of the worst pitching in the NL that season) had only two pitchers on the roster who finished with a losing record. Bob Purkey and Luke Walker both finished the season 0-1.

Every once in a while a position in sports is filled by just a few people over a long period of time. Earle Combs patrolled center field for the Yankees from 1924-1935 giving way to Joe DiMaggio who was there until Mickey Mantle took over in 1952. From 1968 to present day the Pittsburgh Steelers have had only three coaches (Chuck Noll, Bill Cowher, Mike Tomlin) and in Boston Ted Williams ruled left field (minus time off for the military) from 1940 to 1960 when Carl Yastrzemski took over. Actually Williams became a regular for Boston in 1939 but moved from right to left permanently the following year. Yaz was there basically until Jim Rice came along.

There was a lot of pressure on Yaz following in the footsteps of Williams. He was up to it, but never as much as in 1967. It was the year of the Impossible Dream with the Sox making it to the World Series. While they didn't win it, it wasn't because Yaz didn't try. It was his Triple Crown season and the second time he won the AL batting title. He would win three.

It was a stretch of 23 games in August in which the Sox needed his help the most and he performed. It began with the Sox three games back of first place on August 15th. The streak of 17 wins out of 23 games began with a 4-0 shutout of the Detroit Tigers. It ended with with a September first pounding of the White Sox 10-2. The Red Sox were now in first place, half a game up. 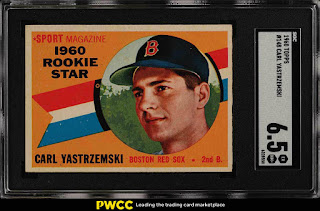 In that run was a seven game winning streak over the Angels and Senators including a double bill where Yaz homered in each game (no's 30 & 31). During the win streak Yaz hit .278, scored 23 runs, drove in 17 more and belted eight homers. After going 0-17 late in the streak he started the game on the bench only to come in and hit home run no. 35 in two at bats late in the game. It was a 2-1 win over the Yankees in New York to put the Sox up by 1.5 games.

Perhaps his biggest moment on the stage was at the end of the season with the pennant on the line. It was the final two games of the regular season. Facing the Twins in the final battle for first place Yaz went seven for eight with six RBI as the Red Sox took the final two games 6-4 and 5-3. In the finale the Sox left fielder went 4-4. 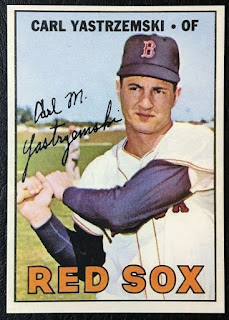