TRIVIA QUESTION: In December, 1963 the Phillies acquired all-star pitcher Jim Bunning for the 1964 season. They traded Don Demeter and Jack Hamilton to Detroit for the future HOFer and one other player. Who was the other player?

ANSWER TO TRIVIA QUESTION IN THE PREVIOUS COLUMN:  For whatever reason, despite batting left handed and getting a better start out of the box, Red Sox legend Carl Yastrzemski always grounded into a lot of double plays. Only three times in 23 years did he NOT reach double digits in banging into twin killings. He led the league twice, topping out at 30 in 1964. Two years earlier he did it again with 27.

It was not worst to first but improving by 34 wins from one season to the next is a pretty remarkable achievement. Such were the 1961 and 1962 Philadelphia Phillies. Both teams managed by one of the men considered by many to be a great manager; Gene Mauch. In 1961 the Phils finished in last place with a 47-107 record. The following year they improved to 81-80, while moving up to 7th place. Maybe it had something to do with Telstar!


Two things of note here. In 1961 they played 154 games and there were eight clubs in the National League. The following season the Mets and Astros arrived and there were ten teams playing 162 games. So you can judge for yourself if eighth place among eight teams is much worse than 7 out of 10. Before we jump to any conclusions here and say winning 34 more games is quite an accomplishment, we need to also point out 36 of the 162 were against the Mets and the Astros. In 1962 each team played every other team 18 times which translates to 36 against the expansion teams.

The last three teams in the NL won only 163 games and lost 304! They were the Astros, Cubs and Mets in that order.

The 1961 Phillies were led by Don Demeter's 20 home runs in a limited role, while regular players such as Pancho Herrera hit 13 followed by 12 for Tony Gonzales. No regular batted better than Gonzales .277. The club was 7th in the NL in homers and 8th in almost every other hitting category. 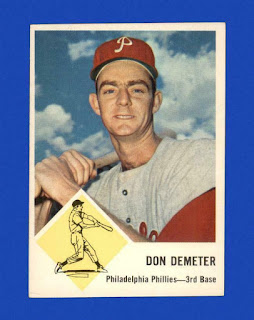 In 1962, Herrera and Roberts were gone, Demeter was healthy and an influx of youngsters bolstered a weak line-up and led the club's surge. Demeter played in 153 games and belted 29 home runs. He also hit .307 to lead the club. Gonzalez improved to .302 and newcomer Johnny Callison provided spark on offense and defense, with a .300 average and 23 homers. 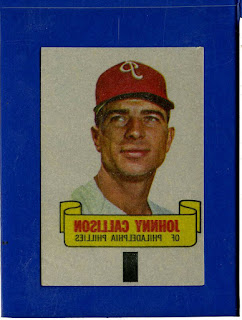 Gonzalez added 20 dingers, Roy Sievers, acquired in the off season from the White Sox for Buzhardt and Charlie Smith, hit 21. He also drove in 80 runs. Frank Torre hit .310 in a limited role and rookie Bobby Wine provided great defense at short. His .244 BA was welcomed.

Pitching definitely improved, too. Adding youngster Clay Dalrymple behind the plate helped. The 25-year old also hit .276 aside from being a fine defensive catcher.

Mahaffey turned it around going 19-14, young Jack Hamilton arrived on the scene and went 9-12, Cal McLish was 11-5 while Short was 11-9. Baldschun was 12-7 with 13 Saves out of the bullpen. They were eighth in almost every pitching category and still gave up an average of 4.28 runs per game. However, the improvement of the offense to 4th in homers in the NL and 6th in BA made up for much of the lapses in pitching. 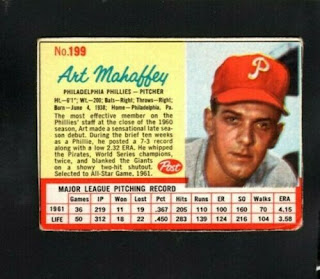 It was Mahaffey's best season and he was a work horse, pitching 274 innings. He would pitch four more seasons ending his career at 28. He would only win 22 more games over the final four years. It was also Demeter's best year. He would never again come close to .300 or 29 homers and retired after the 1967 season in Cleveland hitting .207.  He played 11 years.

Gonzales would remain a Phillie for many seasons but 1962 saw him top out in homers and the following year he did hit .306. In 1967 he came close to winning the batting title at .339. Callison's career was steady, hitting homers in double figures for nine straight years, twice hitting more than 30. He hit 226 in his 16 year career. 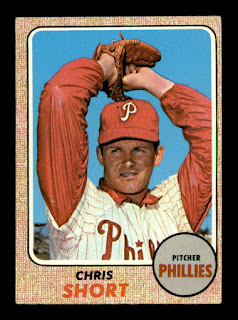 As for Mauch, aside from the 1964 Phillies Collapse where his club finished 2nd, he never finished in first until 1986 as manager of the California Angels. He lost in the post season to Boston in the ALCS 4 games to 3. He finished his career 646-684.