TRIVIA QUESTION:  Did Joe Torre and brother Frank Torre ever play on the same team in the big leagues?

ANSWER TO TRIVIA QUESTION IN THE PREVIOUS COLUMN: While the brothers Perry (Gaylord and Jim) had 529 big league wins between them, Gaylord had the better record in the post season, 1-1. He only pitched in the 1971 NLCS against Pittsburgh. Jim pitched three times in the post season including two starts in the 1965 World Series against Los Angeles, getting no decisions. He was 0-1 in two other ALCS.

When it comes to modern era players who starred in the 1960s, there are few better than Joe Torre, especially behind the plate. Torre set the standard for catchers in the decade both defensively and behind the plate. The Brave's backstop dominated in the mid-60's and from 1964-1966 he was just about the best there was.

While Torre would spend most of his time behind the plate, he'd occasionally get a spell at first base. A position he would dominate in the early 1970's including winning a battle title on his way to a Hall of Fame career.  For the purpose of this column we'll focus mainly on those mid-1960s.
As a 23 year old fourth year player he'd crack .300 for the first time in a breakout 1963 season with the Milwaukee Braves. He battled .321, smacking 36 doubles and driving in 109 runs, while collecting 20 dingers and scoring 87 runs. His 193 hits for a slow moving catcher was remarkable. Along with Hank Aaron and Eddie Mathews he helped form a middle line-up which was devastating for opposing NL pitchers. He was one of five Braves to hit at least 20 homers on a club which won 88 games to finish in fifth place. 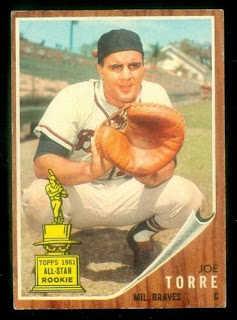 The 1965 season was the teams last in Wisconsin before moving to Atlanta. Again Torre would shine, upping his HR total to 27 while hitting a very respectable .291. The club led the league in homers with 196 and six players hit at least 20. The 1966 season thrilled Atlanta fans and the young catcher, still only 25, put himself on the map.

Torre hit .315 and smashed 36 home runs with 101 RBI. The Braves again led the NL in home runs with 207, and Torre's 36 trailed only Henry Aaron who had 44. But once again the team finished in fifth place. For the fifth straight season he was an All-Star.  Torre also led the league in throwing out base runners at 49-percent. He usually was over 40-percent and six times hit that mark or better. 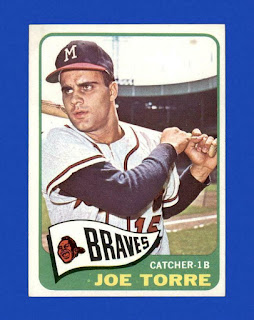 By 1968 the Braves were no longer the Mathews/Aaron/Torre club and continued to falter dropping to seventh place. In 1969 the Braves sent Torre to the Cardinals in a much ballyhooed trade which brought Orlando Cepeda to Atlanta. His first year in St. Louis the former Braves catcher moved to the infield and drove in 101 runs. While his home run stroke never returned to plus-30, his batting average soared.

The seventies started with Torre getting over 200 hits two years in a row culminating in his MVP season with 230 hits, a .363 BA and the batting title. And they weren't leg hits either. At age 30 he had played in 161 games in two consecutive years. He continued to hit well but never again achieved anywhere near his MVP year or his 1960's HR prowess. He finished his 18 year career with 252 homers and a .297 BA, adding 2342 hits.

However, for the 1960's Joe Torre set the standard of excellence on the field he would later maintain as a Yankee manager and an executive in the offices of MLB.