TRIVIA QUESTION: While Frank Howard and Ken McMullen both had more than 600 plate appearances during the 1968 campaign for the Senators, they did not lead the team. Who did with 690?

ANSWER TO TRIVIA QUESTION IN THE PREVIOUS COLUMN:  There were three players on the 1960 Chicago Cubs who hit at least 10 home runs during the season. Ernie Banks led the club with 41, while George Altman had 13. The third player to smack homers in double digits was Frank Thomas who hit 21, and would go on to hit 27 the following season and 34 more with the first year New York Mets.

There were some pretty momentous trades in the 1960s. Frank Robinson to the Orioles for Milt Pappas, Lou Brock to the Cardinals for Ernie Broglio, Dean Chance to the Twins in the Don Mincher deal and Matty Alou to the Pirates for Joe Gibbon. Probably none bigger however (literally) than the trade which sent 6'7" Frank Howard to the Senators in the Dodgers major trade in 1964.

How big was this deal? Osteen became the missing cog in the rotation, eventually taking over for Johnny Podres who was a holdover from the Brooklyn Days. Osteen was an immediate hit. Despite his 15-15 record, he helped the club make it to the World Series by working 287 innings with a 2.79 ERA. He teamed with Sandy Koufax and Don Drysdale to make a formidable 3-legged rotation boasting the best in baseball at the time. He would go on to pitch a 5-hit shutout in Game 3 of the Series which the Dodgers won in seven games. He would twice win 17 games before the decade ended and in 1969 was a 20-game winner with 7 Shutouts. 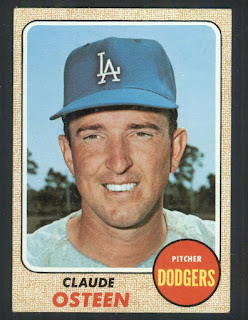 Kennedy never could hit but he proved a valuable late inning replacement defensively on both the 1965-66 pennant winners. A liability on defense for a time in Washington, his wizardry and only 12 errors in two seasons in Los Angeles gave an assurance to manager Walter Alston in the late going.

While Washington never made the Series, Howard (the Washington Monument) was not the only player to emerge as a solid player for the Senators from the trade. He was the biggest certainly. The slugger would clobber American League pitching with 44, 48, 44 homers from 1968-1970. Four times he drove in 100+ runs and never failed to homer in double figures until his final two seasons midway through his 30's. Drafted by the Philadelphia Warriors of the NBA he signed with the Dodgers and was named 1960 NL Rookie of the Year.

Ortega won 39 games in five seasons and was a work horse before retiring in 1969. McMullen was an immediate hit in Washington. He had solid seasons hitting double figures in home runs and batting for a respectable average during his five-plus seasons in the nation's capitol. In 1969 he hit 19 homers and .272 with 87 RBI for his best season. 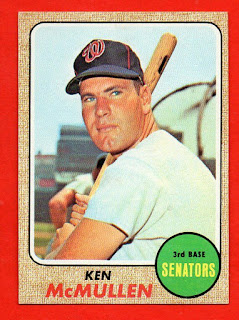 Richert immediately won 15 and 14 games as a starter his first two seasons as a Senator but really had his best success as a specialty reliever later in his career. In 1968 he became a bullpen pitcher and closer with 51 saves over seven seasons. In 1970 he registered 13 Saves, 1.98 ERA and 66 strikeouts in 54 innings. He finished his 13 year career with a respectable 3.19 ERA and an 80-73 record.

Dick Nen was a good defensive player with an occasional hitting stroke. He made only 16 errors in six seasons mainly at first base. His best season in Washington was his first with a .260 BA, six homers and 31 RBI in 69 games. His career ended with the 60s. His bigger claim to fame may be as the father of former reliever Robb Nen. His only hit as a Dodger was a memorable home run off Bob Gibson over the roof to tie a game and help the Dodgers move closer to the pennant in 1963. 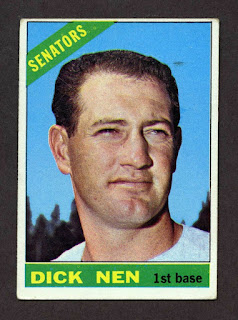 To boot the Dodgers got a hundred grand in the deal, which they may have used when Drysdale and Koufax held out for a hundred grand apiece. Only Mr. O'Malley knows where that money went.