TRIVIA QUESTION: During the 1960 season only three Chicago Cubs hit at least 10 home runs. Ernie Banks had 41, George Altman 13 and a third player belted 21. Who was that player?

ANSWER TO TRIVIA QUESTION IN THE PREVIOUS COLUMN:  There were two brothers who played over a two year period for different expansion teams in the 1960s; Bob and Ken Aspromonte. Ken, who came up with Boston in 1957 played for the expansion Angels in 1961, and Bob, who came up as a Brooklyn Dodger in 1956 went on to play with Houston's Colt 45's in 1962. Ken was actually taken in the expansion draft by Washington and then traded to Los Angeles. Bob was drafted by Houston from the Los Angeles Dodgers.

From 1965 to 1973 the Chicago Cubs were blessed with one of longest running double play combinations of the modern era. While the duo of Bill Mazeroski and Gene Alley were setting records in Pittsburgh in the 1960s, the pair of Don Kessinger at short and Glenn Beckert at second were turning them over game after game. They also put up numbers at the plate to drive the Cubbies for years.

While Beckert debuted in 1965, Kessinger came up a year earlier for a cup of coffee. Neither one of them hit their first year together for much of an average, but it was obvious the Cubs were planning their infield around this pair. With Ron Santo at third and Ernie Banks at first, they were just about the most solid and consistent infield in the big leagues. 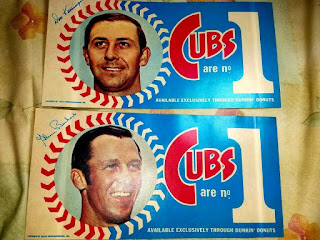 Kessinger's .201 and Beckert's .239 that 1965 season were not spectacular but the following seasons were different. Starting in 1966 the light hitting Kessinger would average about .250 while his counterpart would be up around .285, occasionally crossing the .290 mark. It was in the field however where they did the most damage.

Beckert twice would cross the 100 mark in double plays turned from 1966-1968 with two other seasons registering 89 each. Kessinger would reach 101 and 97 with a few other seasons right around 70. They were not anywhere near perfect. Kessinger's errors were pretty consistent with one season (1966) reaching 35. Between them they averaged about 50 errors per season. Today that would drive their market value down to someplace around "we're moving you to left field" to give some kid a chance. This was the 1960's however, and with Banks and Santo anchoring the corners, the Kessinger-Beckert duo stuck around a long time. 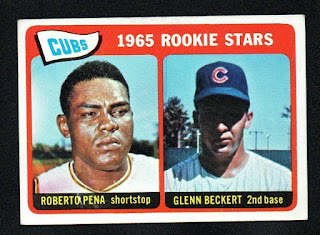 Beckert won a Gold Glove and appeared in four All-star Games. Kessinger appeared in six All-star games and won two Gold Glove Awards. He was also named the recipient of the Lou Gehrig Memorial Award. In 1968 and 1969 Kessinger led the NL in double plays at Short, while in 1968 Beckert was second in the category to Cookie Rojas of the Phillies.

Between them they played the most games at their positions during the time period, than most others, and together it seemed like they were one name; Kessinger/Beckert. In 1968 Beckert led the NL in runs scored. In 1969 Kessinger led the league in games played at Short, double plays, put-outs, assists, errors and fielding percentage! Now that is an accomplishment. 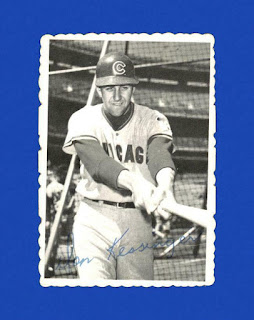 Kessinger would retire after 16 seasons, spending his last few years with the Cardinals and the White Sox, while Beckert would call it a career after 11 seasons. The final two were with the Padres. While neither will make the Hall of Fame, there is no denying their impact on the late 1960s Chicago Cubs, helping the club to a second place finish and a pair of third place finishes from 1967-1969.