PItchers Who Lose 20 Games Are Good

Just a side note: this is column No. 100 in our weekly efforts "baseball in the 1960s," and we thank you for your support as loyal readers! - Bob Brill

TRIVIA QUESTION: Tom Seaver was the first Met to win 20 games. Who was the second?

ANSWER TO TRIVIA QUESTION IN THE PREVIOUS COLUMN:   While Jim Mudcat Grant was the first American League pitcher to win 20 games, the first to do it in the National League was the Dodgers Don Newcombe.

It's been said "you have to be a pretty good pitcher to lose 20 games in a season." If that were the case then both Al Jackson and Roger Craig should be put into the Hall of Fame. The statement, attributed to some baseball expert, basically means if you are good enough to be such a big part of the pitching staff that you lose 20, there must be a whole lot of guys worse than you on that staff. 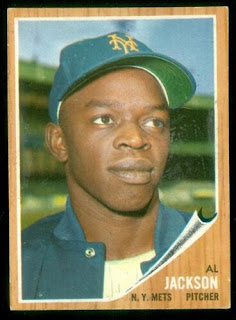 It's not that Craig and Jackson were so good, or even so bad for that matter, it's just they both played for the lowly New York Mets early on. During the 1960's they each lost 20 games not once, but twice. 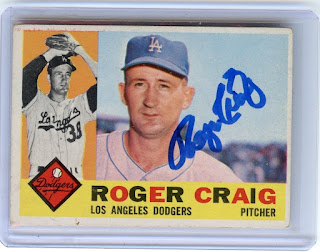 
It is difficult even now to imagine how bad New York was and for how long. It wasn't until the 1969 break out year when the Mets finally moved into the first division, people began to look at the club in a different light.

October 2, 1966 was a monumental day in Met-dom. The club would finish for the very first time NOT in last place. In typical Mets fashion however, they lost a double header to Houston on that final day of the season to do it. Their 66-95 record placed them 28.5 games behind the Dodgers, and the Cubs would be the only club behind them at 59-103. The Cubs got the dubious distinction of being the first club to ever in history finish lower than the Mets. 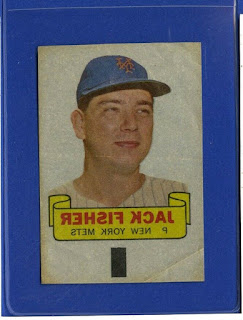 Craig, for his part had a career in Brooklyn and Los Angeles, winning 49 games for the Dodgers before moving to the expansion Mets. He would win 15 with New York and another 10 before calling it a career with other teams. He'd close it out 74-98 with a respectable 3.83 ERA. Take away his NYM losses and he'd have a 74-54 record.

Jackson, who was a big winner in the minor leagues before being called up by the Pirates for a brief pre-Mets stint, had his best season with the Cardinals. After moving to St. Louis, the 1966 season saw him at 13-15 with a 2.51 ERA. Pitching mostly out of the bullpen the following year he was 9-4 but ended back with the Mets for the 1968 season.

After making only one appearance for the Mets in the 1969 season, he was sold to Cincinnati in June, therefore missing the chance to play in the World Series with New York. It would have been a fitting opportunity for Jackson, who was there at the beginning and was obviously one of the best pitchers those early New York teams had. It wasn't to be. He finished 67-99 with a 3.98 ERA. For a pitcher known for losses, he at least failed to reach 100 losses.