A Most Efficient Night of Baseball

ANSWER TO TRIVIA QUESTION IN THE PREVIOUS COLUMN:  The two players aside from Stan Musial, who hailed from Donora, PA, were none other than Ken Griffey and Ken Griffey, Jr.

"EFFICIENCY; the state or quality of being efficient, or able to accomplish something with the least waste of time and effort; competency in performance.

That's how the dictionary defines the word "efficiency." In May 15, 1963 in Cleveland the word "efficiency" was described in four other words; Mudcat Grant - Orlando Pena. When the two pitchers squared off in Cleveland Stadium that warm spring night, few of the 3300 people in the stands expected to be out of the ballpark and on their way home 1:57 later. 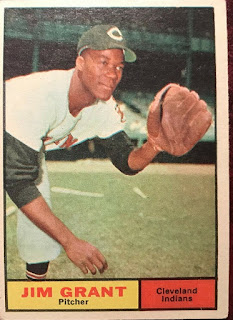 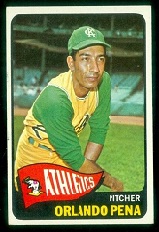 If they walked in a shade late, they missed all the action. The A's were 18-13, a single game back of the league leaders. The Indians were were 12-13 and seven back. Pena was the ace of the A's staff on a team which would go on to a 73-89 record and an eighth place finish, 31 games back of the pennant winning NY Yankees. The Indians were not much better, 79-83, and 25 games back, for a fifth place finish.

However, this night was something special; at least for two guys going in opposite directions. Grant opened the game putting down the A's in order, 1-2-3. It was something he would do six times that evening. Pena would do it four times.

The only scoring came in the bottom of the first when the Tribe's Vic Davalillo reached on a single to right to lead off the inning. Al Luplow followed with a single to right sending Davalillo to second. Pena struck out Woodie Held and got Joe Adcock on a weak pop out to the infield. Tito Francona then laced a single to center to score the speedy Davalillo with the only run of the game, giving Cleveland a 1-0 lead. Pena walked Johnny Romano but got Max Alvis to ground out to end the inning. 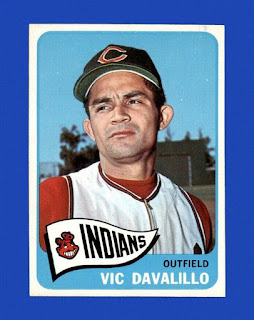 A lead off walk to Norm Siebern in the third and a two out double by Wayne Causey in the third were the only other opportunities Grant afforded Kansas City, until the eighth when Chuck Essegian led off with a single.

Pena was just as magnificent before giving way to John Wyatt in the ninth. When the dust settled each side sent only 30 men to the plate, or three batters over the minimum. Grant pitched a complete game shutout, giving up two hits and walking one while striking out three.

For his part, Pena gave up four hits in eight innings of work, walked two and struck out five in facing 27 batters. Wyatt took out the Tribe in a 1-2-3 ninth to also face the minimum of three. Pena finished the night at 4-3 on his way to a 20 loss season. Grant was 3-3 at the time and would finish 13-14 on the year. Two years later he would win 21 with the Twins and help Minnesota to the AL title.

That night in Cleveland however, was a night when the word "efficiency" would become a pitching coaches dream.