A-s Inept A-s They Could Be

TRIVIA QUESTION:  He batted over .400 in two straight World Series with the Yankees but finished his career in 1965 with the A's and the Braves. Who was he?

ANSWER TO TRIVIA QUESTION IN THE PREVIOUS COLUMN: When the Dodger's Tommy Davis drove in 153 runs in 1962, he broke the franchise record set by Roy Campanella when the team played in Brooklyn. Campanella drove in 142 runs in 1953.

The Kansas City A's of the 1960's were an enigma. In three of four years during the middle part of the decade they were as inept as a team could be. From 1964-1967 they lost 393 games, finishing 10th out of 10 teams in three of those seasons. The rest of the decade wasn't much better. When you look at the roster for the 1964 club however, you have to wonder what might have been. 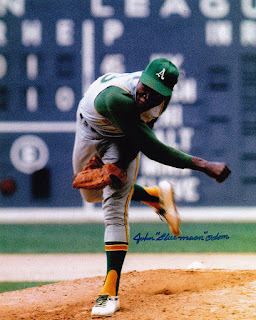 Taking the players in their better years you would have an all-star team for the decade. The 1964 club had the likes of Blue Moon Odom who won at least 15 games three times, Jose Santiago who three years later would lead the AL in winning percentage with Boston at 12-4, Moe Drabowsky who became a premier closer with Baltimore, Ken Sanders who became an outstanding closer with Milwaukee and led the league in 1971 with 31 Saves, Lew Krausse a solid starter later in his career, and John Wyatt, Wes Stock and Jack Aker. The latter three proved to be some of the best relievers in the game combining for 249 Saves. Several of the above later wore World Series rings.

At the plate there was more of the same. Jim Gentile belted 179 career homers and drove in 141 in 1961 to lead the AL. With 374 career home runs, Rocky Colavito would lead the league in RBI the following season (with Cleveland), Bert Campaneris, Ken Harrelson and Jose Tartabull were all budding stars who would have outstanding seasons after 1964. Even Dick Green would have a nice career and eventually play in a World Series. The rest of the team wasn't that bad.

It might have been the presence of team owner Charlie O. Finley who was a character himself (see a previous blog) but what went wrong with a team which could not win? 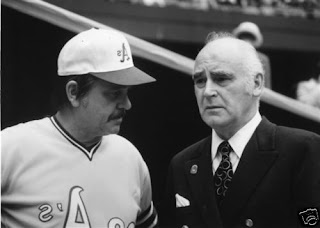 The team did lack a stopper; a pitcher it could depend on to stop a losing streak and the A's had many losing streaks. The club lost four of it's first five and never looked forward. By May 24th they were 11 games back of the league leaders and the season was pretty much over.

Around that time they lost 10 of 11, won three out of four and promptly lost 10 of their next 12. Then all of a sudden they won eight of their next nine. Could there be a resurgence. They went from 16.5 games back to 13 back and there was a new found spirit in the clubhouse. That lasted for all of ten minutes. Another losing streak (10 out of 11) where the A's scored a total of 17 runs in 11 games. Back to 18.5 games out.

The worst day was July 25th when they were pounded by the Angles 18-2. Orlando Pena gave up 11 runs with four homers in just four innings. Bo Belinsky shut the A's down on five hits. The teams best day was October 4th when the season mercifully ended. They were shut out by the White Sox in the final two games. It was a season of 57-105.

They started the 1965 season the way 1964 ended. They lost 11 of their first 13. After two wins they promptly lost 10 of 11 and at 5-21 manager Mel McGaha was gone. He had taken over mid way through the previous season. It was basically the same team with almost the same result but two games better with 103 losses. 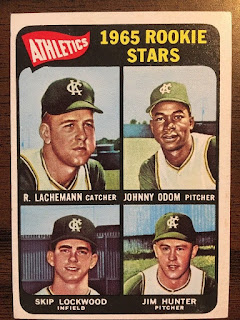 The big difference perhaps was 1965 which saw the debut of a young pitcher from Hertford, North Carolina by the name of Jim "Catfish" Hunter. The future Hall of Famer started his rookie season and finished 8-8. He got his first win after two losses on July 27th, besting future Cy Young winner, Jim Lonborg in a wild game 10-8. Hunter did not pitch well, giving up five earned runs in five innings but a W is a W and the rest was history. He would go on to win 20 or more games in five straight seasons in the 1970's with the A's and then the Yankees.