The Last Player to Break the Color Barrier in MLB

TRIVIA QUESTION:   Jackie Robinson broke the color barrier in 1947 when he entered the game for the National Leaue Dodgers. Who was the first AL player to break that barrier?

ANSWER TO TRIVIA QUESTION IN THE PREVIOUS COLUMN:  The 1965 Los Angeles Dodgers didn't hit many homers on their way to winning the NL Pennant and the World Series. They were a team of a walk, a stolen base, a bunt and a sac fly and then win 1-0. Sweet Lou Johnson and rookie Jim Levebre tied for the team lead with 12 home runs each.

Thursday, September 26, 1963, was like any other day in the history of the New York Mets. They lost to the Dodgers in Los Angeles 5-4 on their way to a second straight year of losing 100 or more games. But this story isn't about the Mets or 1963 as much as it is about what happened just a few years earlier, and it is fitting the player who is the focus of this column played his last game in the majors against the Dodgers; the team which broke the color barrier with Jackie Robinson in 1947.

It is doubtful the 18,546 fans who showed up that night at Dodger Stadium and spent the next 2:15 watching a baseball game, even thought about the fact Elijah Jerry "Pumpsie" Green was playing his final game in the majors. It was Green who became the last player to integrate the game of baseball. In 1959 he came into the lineup for the Boston Red Sox as a pinch runner and therefore the Red Sox became the very last team to employ a Black player. It only took 12 years for all teams to follow the Dodgers lead n 1947 and right an egregious wrong on an entire segment of the population. 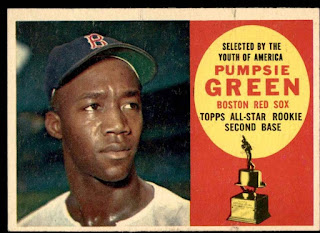 Green spent four seasons with Boston but was never an impact player. He never batted more than 313 times, never hit more than .260 and his entire major league total was 13 home runs. However, it was this Boley, Oklahoma native who completed the cycle of breakthroughs for the great game of baseball. He was mainly a middle infielder and pinch hitter who was purchased by the Sox in 1956 at the age of 23 and had to wait three years before being called to the Show. By the end of the 1962 season the Sox decided he wasn't going to help them and packaged him up with a player to be named later and Tracy Stallard to the New York Mets for Felix Mantilla. The Boston Red Sox sent Al Moran  to the New York Mets to complete the trade.

The Mets had just come off their debut season, the worst in MLB history and while the Red Sox were not big winners, there must have been some consternation for Green who may have seen this as a chance to play more often with the lowly Mets.

On this Thursday in September he would go 1-4 driving in a run with a single off Larry Sherry with his last hit. His last at bat came against Ken Rowe and he popped out to shallow left to shortstop Dick Tracewski.

While Green's career didn't last too long, his brother Cornell's career did. Cornell was a defensive back for the Dallas Cowboys and played 13 seasons in the NFL. Interestingly enough he wasn't drafted by the NFL but rather the NBA. He chose football after an All-American career in hoops at Utah State. Their brother Credell was drafted by the Green Bay Packers.

On April 17, 2009, the Red Sox honored Green with a first pitch ceremony, marking the 50th anniversary of his breaking the color barrier in Boston.