The Steal Which Changed A Season

TRIVIA QUESTION: Dick Allen was only one of the Rookie of the Year players who took part in the game which is the topic of today's blog. While Allen was the 1964 ROY, who won the NL ROY the previous year; 1963?

ANSWER TO TRIVIA QUESTION IN THE PREVIOUS COLUMN:  The 1963 Washington Senators were an awful team and finished in last place again, nearly 50 games out of first. No wonder they went through three managers that season. After former slugging first baseman Mickey Vernon was let go, he was relieved on a short term basis by Eddie Yost, who was replaced by a first baseman many believe should be in the Hall of Fame; Gil Hodges. Hodges success with the Sens was limited but he did take the 1969 Miracle Mets to the World Championship.

Never before or since has one stolen base meant so much to a baseball team and a city. In 1964 the Philadelphia Phillies, led by the manager many believe should be in the Hall of Fame, Gene Mauch, were sailing along on their way to the pennant. The Phils were blessed with a dynamite ball club.

Rookie of the Year Dick Allen would provide the power along with veteran Johnny Callison. Allen, the temperamental third baseman, would blast 29 homers and lead the league with 13 triples and 125 runs scored, while batting .318. He also had 201 hits. Callison blasted 31 dingers, They also had Wes Covington, Tony Gonzalez and Cookie Rojas.

On the mound they were blessed with strong starting pitching led by Jim Bunning (19-8 2.63 ERA), lefty Chris Short (17-9 2.20 ERA) and a pair of 12 game winners in Dennis Bennett and Art Mahaffey. Out of the bullpen it was Jack Baldschun and Ed Roebuck with 33 Saves between them. Bobby Shantz and Bobby Locke contributed strong performances.

The Phillies were well in the lead in the National League heading down the home stretch. With 12 games left the Phillies led the Cardinals by 6.5 games. If they basically split the last six games they would walk into the World Series. Even if they win four of those games they likely to get in. The fates had something else in mind.

On September 21st, the Phils were at home to play the Cincinnati Reds who were also in the race. Mahaffey squared off against John Tsitouris. Tsitouris never had much of a career, winning 34 games overall and this year he would finish 9-13. He was coming off his best season, at 12-8.

The Reds were three years removed from the World Series and were still a powerful club with Frank Robinson, Pete Rose, Vada Pinson, Deron Johnson, Leo Cardenas and a rookie named Chico Ruiz who played third that day.

Through five innings neither team could get a whiff of a run. Mahaffey was throwing well but Tsitouris was outstanding. He was giving the Phillies nothing and was logging one of his best games ever. Then came the top of the sixth. 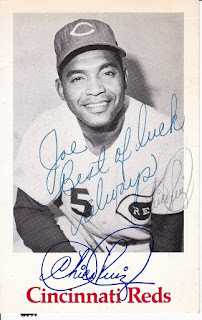 Pete Rose grounded to second to start off the inning but Ruiz followed with single. When Pinson singled, Ruiz took third. However, Pinson, trying to stretch a single into a double was thrown out at second base. That left a runner (Ruiz) at third with two outs and slugging Frank Robinson at the plate. Robinson was having an average year for him, nearly 30 home runs and a .306 average. With the slugging Deron Johnson on deck, there was really no thought of walking F-Robby. He did lead the league in Intentional Walks four years running but Mahaffey soon quieted that notion when he put two quick strikes past Robinson.

So here is the situation. There is no score, two outs in the sixth and two strikes on one of the game's great sluggers. What happened next was something no one expected. On the 0-2 pitch Ruiz broke for home. Maybe Mahaffey was surprised, certainly Robinson was. In what was one of the dumbest moves ever in baseball, Ruiz tried to steal home. Shocked, Robinson luckily caught him out of the corner of his eye and backed away. Mahaffey's pitched sailed wide and catcher Clay Dalrymple could only grab it, come back and try vainly to tag Ruiz to no avail. 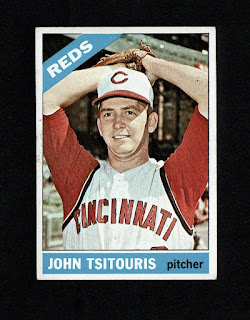 Ruiz scored and the Reds led 1-0. Tsitouris made it stand up. He went the distance pitching a 6-hit shutout, walking two and striking out eight. It might be argued since Robinson did get a second hit later in the game, he just might have gotten a hit when Ruiz stole, but thankfully Robinson didn't swing or Ruiz head may have ended up over the left field wall.

Either way, the die was cast. The Phillies proceeded to lose their next nine in a row before winning the final two. It didn't matter. The Cardinals the very next day began a streak, winning nine of their next 10 games and taking the 1964 pennant. At the same time the Reds won seven more in a row before losing four of their last five games to fall out of contention. The Reds and the Phillies would finish tied in second place, just one game back of the Cardinals in one of the most memorable finishes to a baseball season ever recorded.

Chico Ruiz, the only player to ever pinch hit for Johnny Bench, had his own moniker after that. His play became known to Phillie fans as the "Curse of Chico Ruiz," while other fans dubbed him something more harsh. Philadelphia, which last went to the World Series in 1950, would have to wait until 1980 to get there again.

Ruiz had a colorful career which ended way too soon. Ruiz became a U.S. citizen on January 7, 1972. Early in the morning of February 9, just before he was to join his new team, the Royals, in spring training, Ruiz was killed when he drove his car into a sign pole while driving alone outside of San Diego. Deron Johnson attended the funeral.

Mahaffey, known for losing 19 games in 1961 and winning 19 the following year, was out of baseball after two more seasons. He won three games over those two years. Tsitouris didn't fair much better. He would win only seven more games, closing out an 11 year career in 1968.