The Wierdest Trade Perhaps EVER!

TRIVIA QUESTION: In the season following the trade discussed in this column, where did the White Sox and A's finish in the 1965 standings?

ANSWER TO TRIVIA QUESTION IN THE PREVIOUS COLUMN:  When Houston got its first major league team in 1962 they were the Colt .45's and played in Colts Stadium, which was known for having the biggest mosquitoes in the big leagues.

Baseball is a rather bizarre sport since like Forest Gump said when it came to a box of chocolates; "You never know what you're gonna get." That's like a paraphrase but it's true. Such was the case in January/February, 1965. Three teams were involved in a rather strange trade which would have implications far down the road.

The 1964 season finished with the White Sox in second place behind New York by one game, recording a total of 98 wins. They were hoping to push themselves over the top in 1965 as the Yankees were aging and would play in their last World Series (1964) until 1976.

The Indians finished four games under .500 in seventh place with just 79 wins and the Athletics closed out their season in Kansas City with 105 losses in last place. The A's were a fairly young ball club with potential while the Indians were a mixed bag led by Sam McDowell, Fred Whitfield, Larry Brown, Chico Salmon and a smattering of other players. Chicago was old. Led by 41 year old Hoyt Wilhelm they had 10 other players on the roster past 30.

In January 1965 the three teams pulled off a trade. The Sox sent outfielders Mike Hershberger and Jim Landis (a pair of defensive standouts) to the A's along with a Player to be Named Later. The player turned out to be pitcher Fred Talbot. Then they traded catcher Cam Carreon to the Indians. The Indians sent young center-fielder Tommie Agee, pitcher Tommy John and catcher John Romano to Chicago. In return, Kansas City shipped slugging outfielder Rocky Colavito to Cleveland.

Now if you followed all of that you probably realized there were some pretty big names there along with Cam Carreon. Carreon would play eight seasons in the big leagues hitting .264 with 11 home runs. He was out of baseball two years after the trade. He would die at the age of 50 and is buried in Colton, CA. 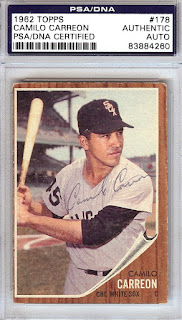 Landis was an outstanding defensive outfielder whose best years were clearly behind him. He would only play a couple more years, never batting better than .237. His best season was 1961 when he belted 22 home runs and hit .283. Hershberger, another defensive stalwart, retired in 1971 with a .252 lifetime average and 26 home runs.

Talbot had two decent seasons as a starter winning 10 games in 1965 and 11 the following year when midway through the season, the A's traded him to the Yankees in the deal which brought Roger Repoz to KC. He finished his career 38-56.

The other players went on to better careers. Romano's best years were also behind him but in the following two seasons with the Sox he did hit 33 homers before ending up in St. Louis where he was released after just 24 games. Colavito too had seen better days. In 1965 he led the league in RBI in leading the Indians to a fifth place finish. He played in all 162 games, banged 26 homers and hit .287 while finishing fifth in the MVP voting. He also made the AL All Star Team. The following year he hit 30 homers but his batting average dropped to .238 and he was sent packing, playing for three other teams in a minor role. He retired after playing in 39 games for the Yankees in 1968.

In 1966 Agee was named AL Rookie of the Year when he hit 22 home runs and played outstanding defensively in center. Of course his biggest years came with the Mets when he led the Amazin's to the World Series title in 1969, batting .357 in the Series. It was the White Sox who dealt him to New York. That was another strange trade; Traded by the Chicago White Sox with Al Weis to the New York Mets for Buddy Booker, Tommy Davis, Jack Fisher and Billy Wynne.

All Agee did in his career was bang out 999 hits and in 1979 was named to the New York Mets's Hall of Fame. He won a second gold glove as well.

Probably the most notable player in that trade however was Tommy John. Known to young pitchers today as the guy they get a surgery, which is named after the lefty, John's career after the trade was top notch. Over the next seven years in Chicago he won 82 games. After a 13-16 campaign he was traded to the Dodgers after the 1971 season along with Steve Huntz for Dick Allen. Allen had worn out his welcome in Los Angeles and the Dodgers needed a lefty pitcher. He did not disappoint. 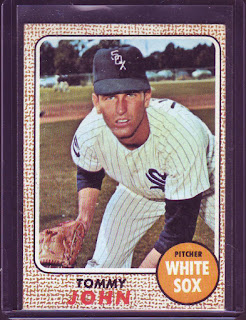 In his next six seasons he won 87 games including a 20-7 record in 1977. He sat out the 1975 campaign with his "Tommy John Surgery." It was a surgery performed first by Los Angeles physician Dr. Frank Jobe and replaces a ligament with a tendon from another part of the body.

In 1978 he helped the Dodgers win the NL pennant and he beat the Yankees in Game One of the World Series, eventually won by New York in six games. At the end of the season he was granted Free Agency and signed with the Yankees. He promptly won 21 and 22 games the next two seasons.

In 1981 the Yankees and Dodgers squared off again in the Series and there was John pitching for New York. He won game Two in a 3-0 shut out with the help of closer Rich Gossage. He would go on to win in double figures four more times, including 13 wins for the Angels at age 44. He finally retired his surgically repaired left arm after the 1989 season at the age of 46. He had gone back to the Yankees who released him before the 1990 season.

He logged 288 wins in a career which spanned an unheard of 26 seasons. Despite losing 231 games, he finished second in the Cy Young voting twice. Yes, Tommy John is more than just a surgery, he was a pitcher of surgical precision.  John never did make the Hall of Fame, finishing with his best percentage, 31% in his final year of eligibility; 2009.