ANSWER to the Trivia question in the previous column:  Casey Stengel managed in 19 tie games in his career.

Most everyone who followed baseball in the 1960s remembers the horrible trade the Cubs made in basically giving away future Hall of Famer Lou Brock. Baseball fans in general know about his all-time base stealing exploits. A few may even remember the home runs he hit in the Polo Grounds. Even fewer  remember the very first base Lou Brock stole.

It was a Friday afternoon at Wrigley Field  in early April, 1962. Less than 10-thousand fans were in attendance, but most of them would witness the beginning of what would become one of the greatest achievements in baseball history. 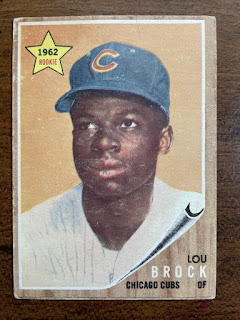 Brock had led off every game for the Cubbies so far but wasn't hitting well and therefore was not getting on base. On Friday the 13th however, in April, 1962 he was not to be denied. Brock was 1/10, batting .100 as a lead off man and struggling out of the gate. In the first inning facing Ray Washburn of the Cardinals, Brock sent a blast deep into right-field for a lead off home run. It would be the first of many in his long career.

His second time up he hit a ground ball single to right. Then with Kenny Hubbs at the plate, Brock took off. Gene Oliver's throw was late and Brock had stolen base no. 1 in his career. He would add a triple in an 8-5, 15 inning Cubs win going 3/8, 3 runs scored and an RBI on the day. It was 17 years later in 1979 when he would call it a career and would add 937 more stolen bases to his record which stood until it was broken by Rickey Henderson.

Eight times he would lead the NL in base steals capping his best total with 118 in 1974. It was fitting the first stolen base came against the team he would become famous with; the St. Louis Cardinals, on Friday the 13th. It doesn't get much better than that. 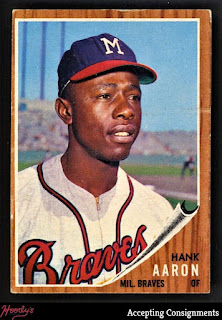 Oh, that Polo Grounds home run. On June 17th 1962, just two months after his first steal, he took the Mets Al Jackson deep, clearing the wall and into the center field bleachers. At the time he was one of only three players to do that. The very next day Hank Aaron also did it making him no. 4. The others who did it were Joe Adcock and Babe Ruth whose blast landed in the old bleachers which was about the same distance.

Base stealing with Ty Cobb and Rickey Henderson and home run blasts with Aaron, Ruth and Adcock. And then there was the Hall of Fame. Lou Brock traveled in some pretty good company.