Vic Davalillo was one of those players with great promise, who had a long career but a career which was made less productive by an early injury. The fleet Venezuelan came up quickly through the Cleveland ranks and in his rookie 1963 season was on his way to Rookie of the Year honors, batting .304 and leading off for the Indians. Then tragedy struck.

On June 12th, facing the Tigers Hank Aguirre in the first inning, Aguirre plunked Davalillo on the wrist. The wrist was broken. He returned weeks later to finish at .292 but he was never able to hit left-handed pitchers as well again. Especially in the power department. Never a power hitter, of his 36 lifetime home runs 28 were against righties, 8 against lefties.

Perhaps his best season was 1965 when he batted .301 with 26 steals. He'd remain in the upper .280's for much of his career but soon managers began to platoon him because his lack of hitting against lefties became obvious. His defense in center field always kept him in games though. 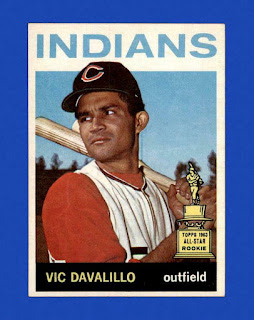 In 1968 he was sent to the Angels for Jimmie Hall and hit .298 in the year of the pitcher. The AL leader in BA that year was Carl Yastrzemski who hit .301.  After suffering a nervous breakdown he would close out the 60s traded to St. Louis. In his first NL at bat he homered and revived his career. It was there he became an extraordinary pinch-hitter and would eventually become a record setter in that department, until it was broken.

Davalillo had his moments of greatness as well as his trying moments. In his 16 seasons in the big leagues he was clutch, getting key hits for the Dodgers in the playoffs and had solid moments in St. Louis and in Pittsburgh, along with a key playoff series with Oakland. He retired at age 40 but went on to play several more seasons in the Mexican League.

Imagine what might have been if not for breaking his wrist as a 23 year old outfielder in Cleveland?