The Day ONE Oriole Ruled the Baseball World

Jim Gentile spent nine seasons in the big leagues and had a lot of big games, but none bigger than against the Twins on May 9, 1961. It was one of those games the Baltimore Orioles slugger would remember for the rest of his life. It put him into the conversation for the best in the league and the MVP award.

He was batting clean-up that day, behind all-star Brooks Robinson. The Twins sent Pedro Ramos to the mound against Chuck Estrada. It was early in the season but neither team was playing impressive baseball. The Twins were at .500 and the O's were just two games over. 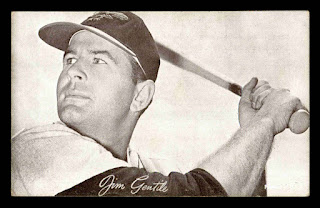 The game had a great start for Baltimore. The 4514 fans at the game were frustrated right off the bat. Whitey Herzog opened with a walk and Jackie Brandt followed with a double. Robinson walked to load the bases, bringing up the slugging Gentile. Gentile, who would finish with 46 homers that year, sent a Ramos pitch to deep center and over the wall at Metropolitan Stadium to clear the bases. The Grand Slam gave the O's an instant 4-0 lead.

The Twins failed to score in the bottom of the inning but the top of the second it was more of the same for the O's including more Gentile. Marv Breeding opened with a fly out but then Ramos did the unthinkable. He gave up a single to the opposing pitcher, Estrada which was followed by a walk to Herzog. That was enough for Ramos who was replaced by Paul Geil.

Brandt then hit a ground ball back to Geil which could have been a double play, but the pitcher made an errant throw and Estrada scored to make it 5-0. Robinson walked again, again bringing up Gentile with the bases load. For the second straight inning Gentile blasted the ball into the seats. This time to right for his second straight grand slam and a 9-0 O's lead.

The rest of the game was pretty much uneventful. Gentile would draw a walk and go down on a strikeout in two subsequent at bats, but in the eighth he came up with a runner on third. A sac fly gave the slugging first sacker nine RBI on the day and the Orioles defeated Minnesota 13-5. It was a day the left handed hitting Gentile would never forget. Two grand slams in consecutive innings and a sacrifice fly to boot. 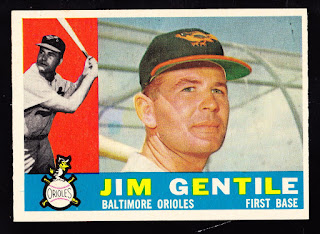 He'd finish the season with 46 homers, a league leading 141 RBI, a .302 batting average and a .646 slugging percentage. He would finish third in the MVP voting behind Roger Maris who hit 61 home runs and Mickey Mantle who belted 54.  His outstanding defensive skills helped him be involved in 129 double plays which was good for second in the American League.

With 179 homers in his career, 1961 was far and away his best season. The Orioles that season would finish third despite winning 95 games. They closed the season 14 games behind New York as the Yankees went on to have the second greatest Yankee team of all time.

But on this day, Jim Gentile ruled the baseball world.