September 22, 1965 saw what was a meaningless game for the two teams involved, but not for the fans. While the Milwaukee Braves were headed for a fifth place finish and the Los Angeles Dodgers were on their way to the National League pennant, for the fans, it was the end of an era.

All 12,577 faithful turned out to see the great Sandy Koufax square off against Wade Blasingame in a battle of lefty aces. Blasingame would win 16 games in 1965, Koufax would win 26. They didn't get to see much of the two pitchers. The Braves scored five runs off of an unusually shaky Koufax and Blasingame gave up six runs in 4.2 innings to the lackluster hitting Dodgers.

However, none of that mattered to the fans who were there to see the Braves last game ever as the home team in Milwaukee. The team was moving to Atlanta for the 1966 season after moving to Milwaukee from Boston in 1953. While in Milwaukee they won two NL pennants and one World Series title.  Their fortunes would be better in Atlanta. In Boston they did win two World Series and three pennants dating back to 1876 when they were the Boston Beaneaters. Milwaukee was their shortest stay by far. 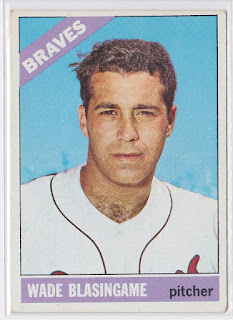 It was an interesting game which featured no less than six Hall of Famers, four of them on the Braves. Hank Aaron, Eddie Mathews, Phil Niekro and Joe Torre were the Braves while Koufax and Don Drysdale were the Dodgers. Drysdale did not pitch in the game, but he did pinch-hit. He was recognized as one of the best hitting pitchers in the history of the game although he grounded out.

It was an ominous start for the Braves who saw the Dodgers open up a 1-0 lead in the first.  In the second, singles by Torre, Gene Oliver and Mathews loaded the bases for light hitting Frank Bolling. Bolling belted a Koufax pitch for a grand slam to give the Braves a 4-1 lead, stunning the Dodger left-hander.

It must have really shaken the usually unshakable Sandy because he gave up a solo shot to Mack Jones to lead off the third followed by a single to Aaron, and manager Walt Alston had seen enough. Howie Reed came in to relieve Koufax. After Torre hit into a double play, Oliver hit one to left which Lou Johnson could not handle and the not-so-speedy Oliver rounded the bases for an inside-the-park home run. The Braves led 6-1.

In the fourth, rookie second sacker Jimmy Lefebvre homered with a man aboard to cut the lead to 6-3. In the fifth the roof caved in on Blasingame. Perhaps he was tired after hitting a double himself the inning prior and remaining at second base for what seemed like an eternity. He was stranded there and walked to the mound to take on L-A in the fifth.

It was typical of the Dodgers to score low in 1965 and this time they put it all together in Dodger fashion. Three walks, a pair of stolen bases and two singles combined for three runs and it was tied. Blasingame left with two out, giving way to Billy O'Dell.

Dodger relief ace, Ron Perranoski came in to pitch the fifth. Usually reserved for the eighth or even the ninth, Alston called on his closer to give rest to a beleaguered bullpen. All Perranoski did was pitch six (YES SIX) scoreless innings, giving up three hits and walking four. 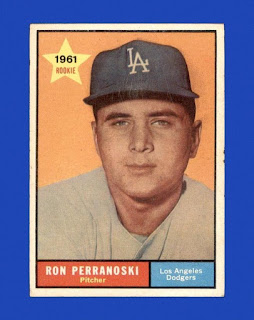 Over the last two of those innings he faced a very young Phil Niekro. Niekro pitched two scoreless as well and they went into the 11th tied at six. Chi-Chi Olivo couldn't hold Los Angeles. After Drysdale grounded out, Maury Wills laid down a beautiful bunt and legged it out. He stole second. Jim Gilliam was intentionally walked and Olivo gave way to Dick Kelley. Kelley quickly got Willie Davis to fly out but Lou Johnson singled up the middle to score Wills and the Dodgers led 7-6.

The Braves had a chance in the bottom of the inning. Bob Miller came in to save it. With one out Jones hit an infield single bringing Aaron to the plate. He hit a sharp drive to center and the quick Davis grabbed it and doubled up Jones at first to end the game.

It was the last time the Milwaukee faithful would see the Braves in County Stadium and it was fitting the great Henry Aaron would be the guy who would turn out the lights. Eleven days later the Braves would close out the season, again against the Dodgers but this time in Los Angeles. It was another loss, 3-0 with Milwaukee getting only three hits. Aaron did not play and the final recorded out by a Milwaukee Braves player was by Mike de la Hoz.

It also pretty much marked the end of the line for slugger Frank Thomas. He went 1-4 for the Braves in that final game and was released at the beginning of the 1966 season. Signed by the Cubs he appeared in five games as a pinch-hitter, going 0-5 with a strikeout. He was released in June and retired. He hit 286 homers with a lifetime .266 batting average for eight NL teams including the Milwaukee Braves twice. A fitting end. 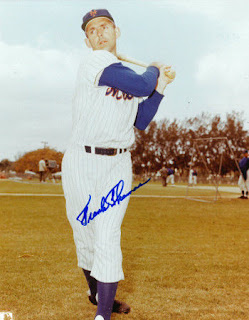 Milwaukee would be without a team until 1970 when the Seattle Pilots, nearly bankrupt after one season, shuttered the stadium in the great northwest and headed off to the Midwest where they became the Milwaukee Brewers. Braves players who continued a few years of stardom in Atlanta of course were Aaron, Niekro, Torre, Jones, Felipe Alou, Tony Clonigar, Denny Lemaster and many more.