The Awful 1962 Cubs Heard Round the World

TRIVIA WINNER: Congrats to Chuck Riffee, of Mineral, VA, who correctly identified the four Boston Braves who played in the Negro Leagues as Sam Jethroe,  Luis Marquez, George Crowe, and Buzz Clarkson. . The Prize: Starbucks Gift Card. NEW TRIVIA CONTEST:  IF YOU ANSWER THE TRIVIA QUESTION CORRECTLY YOU WILL BE ENTERED INTO A WEEKLY DRAWING FOR A Starbucks Gift Card.  YOU MUST ENTER VIA THE EMAIL AT THE END OF THIS COLUMN. DON'T FORGET TO PUT YOUR MAILING ADDRESS IN WITH THE ANSWER SO WE CAN SEND YOUR GIFT IF YOU WIN.

ANSWER TO TRIVIA QUESTION IN THE PREVIOUS COLUMN: There were four Boston Braves who also played in the Negro Leagues; Sam Jethroe,  Luis Marquez, George Crowe, and Buzz Clarkson.

When you start the season losing your first 10 games there is little elsewhere to go but up. Well, except in the case of the 1962 Chicago Cubs. With the likes of Ernie Banks (37 HR), Billy Williams (22 HR, .298), George Altman (22 HR .318) along with Ron Santo, Ken Hubbs and Andre Rodgers, you'd figure this club for better than a 9th place finish drawing just barely 609,000 fans (10th of 10 teams in attendance). But the Cubs did have one highlight that year (see video below). They lost that game too, 5-3 before 6,699 fans as you can see the stands are pretty empty.

Pitching was pretty bad. Bob Buhl and Cal Koonce both won in double figures but Dick Ellsworth was 9-20. Four of the top 10 pitchers had ERA's over 5.00. It got so bad right out of the gate that after 20 games manager El Tappe was gone (4-16), replaced by Lou Klein who didn't do much better at 12-18. with Charlie Metro taking them the rest of the way (43-69). 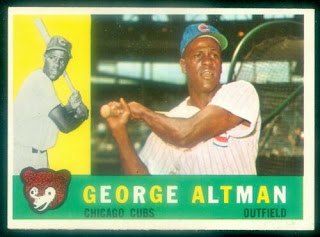 It wasn't that the club was so bad, it's just they never could pull together anything seriously resembling a winning streak. They lost 10 straight starting opening day. They lost four in a row several times, mixed in with losing streaks of 7 and 10 games. They never won more than five in a row and that was in mid-June when they were already 20 games out of first place. 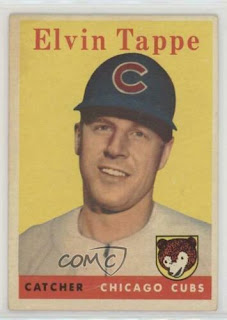 The saddest day was perhaps September 15th at Wrigley Field when before 16,000 fans, the Dodgers spotted them four runs with Don Drysdale on the mound. The Cubbies were drubbed 6-4 and fell 45.5 games off the pace! They only played 162 that season. The team would fix itself for the final 30 days of the season and go 7-7 down the stretch to finish at 59-103.

However, a year later the club really did right itself and under new manager, Bob Kennedy they finished above .500 at 82-80. It moved them up to seventh place and the amazing thing was, they did it basically with the same guys. Larry Jackson was added and Altman was gone. Ron Santo stepped it up and banged 27 homers and hit .297 but Banks fell off to 18 home runs and a .227 BA. Williams did about what he did the previous year and Ellsworth went from a 20 game loser to a 22 game winner. Now that's progress.