TRIVIA WINNER: Congrats to Tim Fealy of Punta Gorda Fl, who correctly identified the Pittsburgh Pirates as the team Mickey Vernon played for at the end of his career. He got to play for the team which eventually would win the World Series in 1960 as the oldest player on the club at 42, the same age as manager Danny Murtaugh. He was signed for the September stretch run and got one hit in nine AB's but was not placed on the World Series roster. The Prize: Starbucks Gift Card.

ANSWER TO TRIVIA QUESTION IN THE PREVIOUS COLUMN: The Pittsburgh Pirates were the last team Mickey Vernon played for in his Major League career, in 1960.

The biggest change from 1960s MLB to today's game is in the pitching department. Today a club carries half a dozen pitchers who may pitch as long as one full inning. In the bygone era of the 60s, it wasn't crazy to see a reliever go three innings. Hal Woodeschick was one of those guys who had a reputation of going even longer when needed. In fact, he was a member of the 1963 NL All-Star team most likely based on his performance in a game which took 4:46 minutes to play. 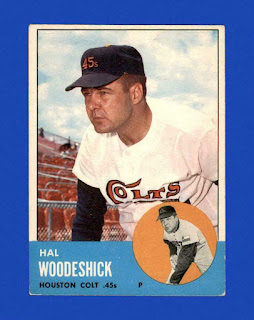 It was June 2, 1963. The "long" reliever for the Houston Colt 45's was called on to be a master of long relief and was rewarded for his efforts. The game at County Stadium in Milwaukee featured the powerful Braves and the barely born Houston club. Just over 8,000 fans packed the stadium for a club which was searching for a new home. Finishing 9th out of 10 teams in attendance the Braves would draw far fewer than a million fans on the season.
(Lee Maye of the Braves recorded this really cool song)

The Braves would hit 204 homers this season but this game saw none by Milwaukee which featured Hank Aaron, Eddie Mathews, Joe Torre and Lee Maye in their lineup along with Mack Jones. Denny Lemaster started against Bob Bruce. Both pitchers were masterful with the Colts scoring one in the second and the Braves their lone run in the third. That was it until inning no. 17. But let's not get ahead of ourselves here.

Bruce was masterful through 11 innings, allowing only one run on eight hits. Lemaster matched him pitch for pitch going 12.2 innings giving up only seven hits and striking out 10. He did walk seven and gave up the game's only home run to Carl Warwick. In the 12th inning, manager Harry Craft called on Woodeschick to replace Bruce. Three times over the next six innings the Braves went 1-2-3. Only in the 15th did the ace reliever get into trouble and it wasn't his fault. Bob Uecker pinch-hit and sent a ground ball to third which aging  Johnny Temple muffed.  Maye grounded into a force out and advanced to second on a passed ball (Jim Campbell couldn't handle it) with Mathews at the plate. Woodeschick struck out Mathews looking, intentionally walked Aaron and got Torre to ground out. Inning over, no runs.

In the top of the 17th after Ron Piche struck out both Temple and Howie Goss, Warwick singled. Rusty Staub singled putting runners at first and second. Campbell and Al Spangler both singled  driving in runs as the Colt 45's led 3-1. That was all Woodeschick needed. After a lead-off single to Roy McMillan in the bottom of the 17th, he got Maye, Jones and Mathews to earn the win. 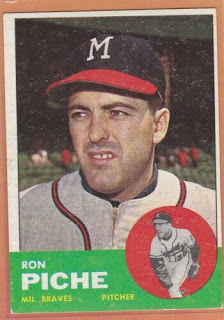 His stat line read six scoreless innings, allowing two hits, striking out three and only one walk which was intentional. A masterful performance and what did the power hitting top four in the line-up of Maye, Mathews, Aaron and Torre do that game? They went a combined 0-24!

Woodeschick would have other solid years moving forward. This one he tossed 114 innings with 1.97 ERA. This was the first year he was converted to a full time reliever, having been a starter and swing man through out his previous big league years. Starting in 1963 he never started another game. It was worth it as he became an ace reliever, even leading the league in Saves with 23 in 1964. He retired after the 1967 season.